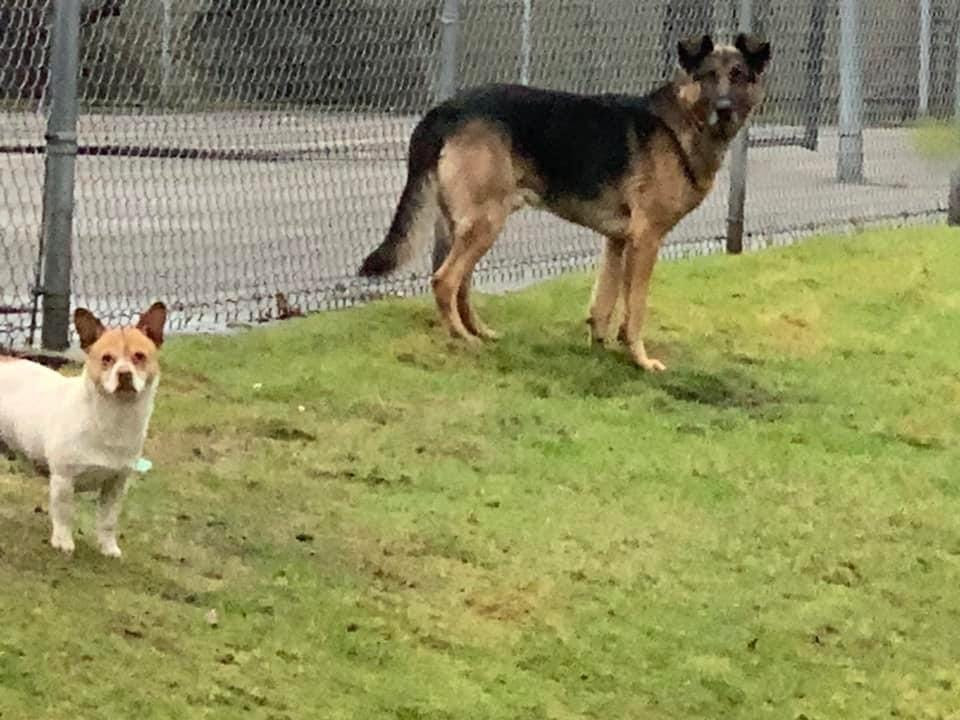 (Surrendered to Shelter) Five or more dogs suddenly appeared in an apartment complex in Lynnwood. Reports said that a van was seen dumping them, but that was never confirmed. At any rate, they didn’t belong to anyone in the apartments. Two of the dogs allowed people to help them, and they went to the shelter right away. Apparently one of them ran off and was hit by a car 8 blocks away. Two of the dogs, a German Shepherd and a chihuahua mix, stayed near the woods at the back of the apartment complex. They didn’t want anyone to get too close to them. Several people contacted me to help.

I arrived at the same moment as an animal control officer arrived. I talked to her and let her know I had two traps with me, and had planned to trap them. I explained I was with the nonprofit Useless Bay Sanctuary, and we had helped many dogs in similar circumstances. I thought I could probably trap them in 20 minutes or so. She said she would stand by and do some paperwork in her truck while I set the traps, and wait to see what happened. Then she got a call of an injured dog needing immediate assistance, so she left. Although the smaller dog did get part way into one of the traps within about 20 minutes, it ended up taking a full day to finally get them both in the traps. When they didn’t go in the first evening, I held the traps open with bungee cords, so the dogs could get used to them, but they wouldn’t be trapped in the middle of the night when no one was available to transport them. I set a wildlife camera to watch the traps.

The next day, I set the two traps to close. Rocky & Bullwinkle, as I began to call them, spent a long time napping in the forest, the next afternoon. When they finally came out, they went in the traps fairly quickly. I have them on my wildlife camera. They showed up to investigate the traps at 3:57. At 3:58, they were trapped, side by side, one in each trap. I wish I had video of them being trapped. Did they both step on the trigger plates at exactly the same moment? Who went in first? Did the second dog see his friend trapped and decide to join him?

This was the fourth time I have helped trap two dogs at once. We caught to Rottweilers in Woodinville, in side by side traps. I caught two pit bull mixes in South Seattle by setting a trap for one and then setting up a crate for the other, and manually closing the door when he went to be near his friend. We caught two shepherd mixes in SeaTac at 1 AM in the rain when one went in a trap and the second went in the adjacent trap. Then Rocky & Bullwinkle, side by side, in less than a minute. I am four for four catching two dogs at once, and it appears that when they are bonded pairs, if you trap one, you are likely to trap the other.

Rocky calmed down soon after we got him into a car. He let me scan him and he did not have a chip, as I expected would be the case. Since the dogs appeared to have been dumped, someone probably wouldn’t dump a dog with a microchip. Bullwinkle was a bit more reactive in the trap. Once we loaded the trap into a vehicle, he calmed down. We caught them too late in the day to be able to take them to the shelter that evening, so we made an appointment to take them the next day. They stayed the night in an outdoor kennel at Diane’s house, where many strays have spent a night or two on their way to safety. Rocky was happy to be with people, and Bullwinkle began to relax a little. We got them to the shelter today. Although I always hope found dogs will be reunited with their families, that seems unlikely in this case. Please check with the Everett shelter and adopt Rocky and/or Bullwinkle if you can. They are good dogs that ended up on the streets through no fault of their own.

If you see a stray dog wandering around, with no known owner in sight, you can always call animal control for help with the dog. In the greater Seattle area, we at Useless Bay Sanctuary are always glad to help stray dogs when we can.