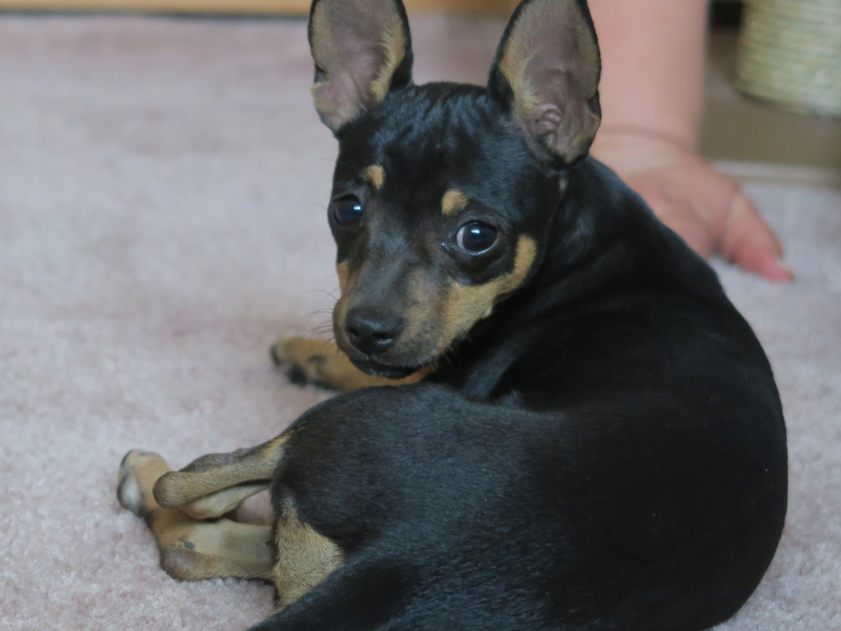 (Adopted) Sweetie was found in Log Boom Park in Kenmore, on July 5th. We were unable to find her previous family after 45 days of searching.  She is a great little dog, about 6 pounds, 6 months old.  She gets along with other dogs and cats.  Sweetie has gone to a great home where she can be with someone all day long.

Volunteers with Useless Bay Sanctuary received reports of a dog yipping and whining in the bushes near Log Boom Park, in Kenmore, WA. They went to investigate on July 5th, and they could hear the dog in the bushes by a creek, although they couldn’t see her. Volunteers set a humane trap that night, and came back every few hours to see if the dog went in. The next day, when a volunteer went to check the trap, she saw the puppy across the creek, near a small cave in the bluff, eating some cat food someone had left for her. The volunteer tried Calming Signals, techniques that often help a dog relax and come closer to a person. Two hours of this didn’t succeed. The puppy retreated into a small tunnel under the root mass of a giant maple on the bluff. All that could be seen of the puppy was a dark mass and reflecting eyes.

After trying a humane trap and calming signals, the next step to try was a Magnet Dog, which is a friendly dog that can be useful in attracting a stray dog. Just the previous week, the UBS Magnet Dog, Fozzie, had helped a dog named Koda who was too wary of people to let them approach. Fozzie helped Koda calm down, and Koda followed Fozzie into a humane trap. We were able to return Koda to his family the next day. Fozzie and his dad loitered about the entrance to the small tunnel, hoping to lure this puppy out, but that wasn’t working either. The next step was to cover the entrance to the small cave with a large net, and then a volunteer was sealed in so that the puppy couldn’t escape if it tried to bolt past the rescuer.

Once the UBS volunteer was sealed in with a device called a Snappy Snare, which is a metal-clad tether on a flexible six-foot-pole, we got our first good glimpse of the puppy. She was tiny, curled up at the end of a wild animal’s burrow under the maple tree. She was about six feet into the hillside, and the little tunnel was just one foot wide, too small for a person to get in. I eased the snare into the hole, and slowly, gently looped it over her head. She turned her head away and burried her nose in the dirt, so this wan’t easy. After about five or ten minutes, the loop was around her neck. I slowly pulled back to tighten the slip lead, and then I started to ease her out of the hole. She resisted at first, but she only weighed five pounds, so she couldn’t put up much of a fight. I pulled slowly, being sure not to hurt her.

Once I had her out of the tunnel, I placed her on my chest, and she relaxed, happy to be rescued. Although she had avoided people up to that point, once she was caught she became a normal, happy puppy. She was dirty, but the dirt brushed off easily and she looked good as new. We took her to the vet, where they estimated her age at 10 weeks old. She did not have a microchip or a collar. She is a very sweet, playful, happy girl, so a volunteer named her Sweetie, at least temporarily. Sweetie is in a foster home while we search for her family. Perhaps they were visiting the park to see the fireworks show, and Sweetie got scared. We haven’t seen any lost dog posters, but we have put up Found Dog posters in the area, along with notices on cragslist and Facebook. Perhaps she will be reunited with her family soon. She is safe and sound for now.