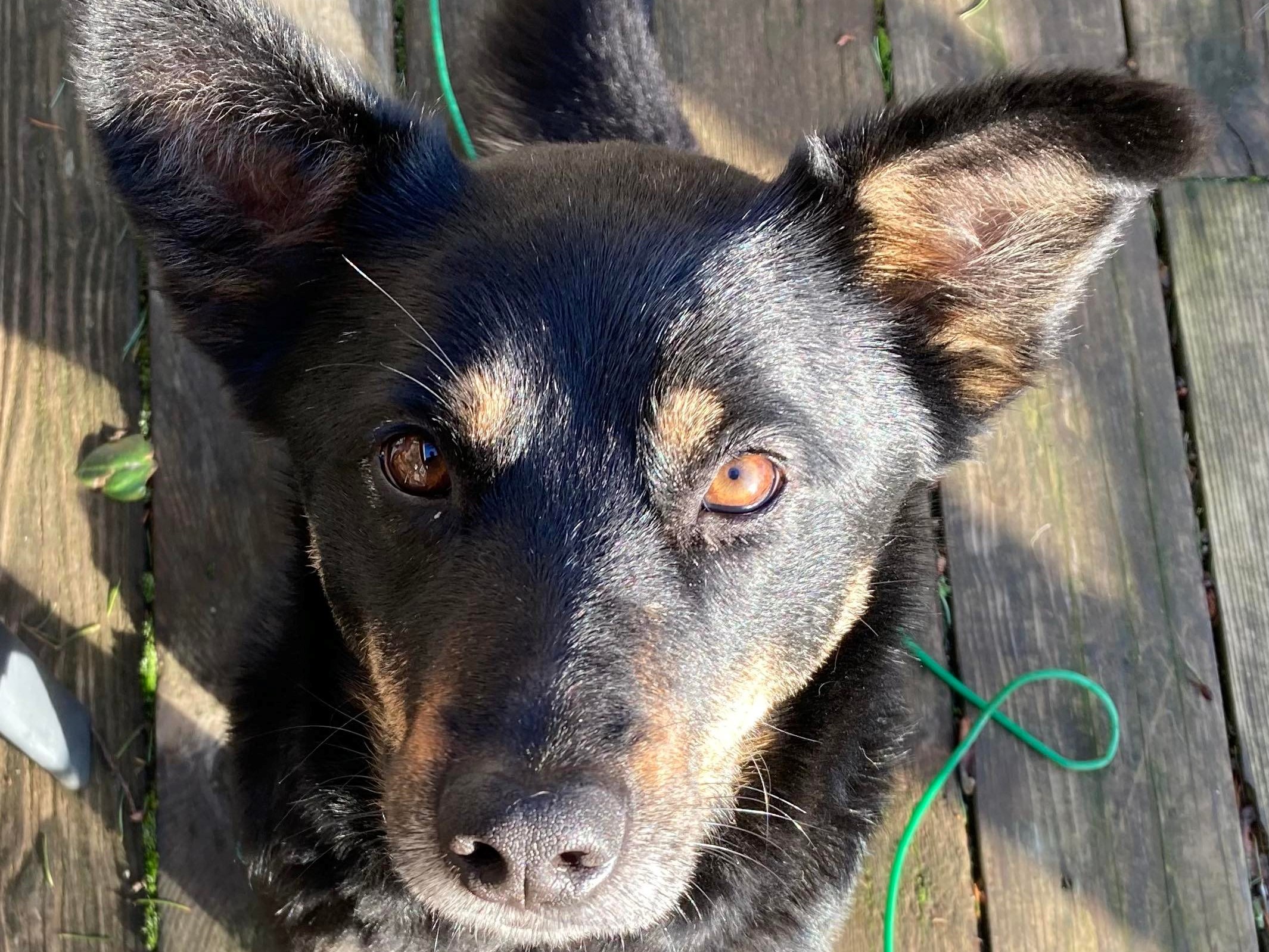 (Available for Adoption) Sapphire is a sweet girl that has seen her share of misadventures, through no fault of her own.  She lived outdoors, mostly, in a rural area in Chehalis.  When her family got new kittens, Sapphire didn’t know how to act around them, and chased them inappropriately.  Her family looked for a new home for her.  When they found someone to take her, she accidentally got out of the car on the first day with her new person.  She escaped right by I-405 in Renton.  Fortunately, she did not run onto the freeway at that point.  She did run as far as 8 miles southeast of the point of escape, and then 8 miles northwest of the point of escape.  She was seen many times and reported to the Lost Dogs of King County Facebook group.

Useless Bay Sanctuary volunteers tried to help 2-year-old Sapphire the entire month that she was on the run, following up on leads and hoping to set a humane trap for her.  We received a report that she had been fed in a yard in South Seattle, and we set the trap for her there.  She never showed up on the wildlife camera at the trap, and then was seen miles away.  Every time we would get a report of her, people would approach her with good intentions, but they would spook her out of the area before we could get there.  Just by driving around in the areas of the sightings, I managed to see her a few times, but she never settled where I could set the trap again.

Kari, a UBS volunteer, put out large signs in the area to generate new sightings of Sapphire.  The bright signs asked people to not chase her, but just report the sightings.  Finally, we got a report of Sapphire inside someone’s fenced yard.  Kari was able to go there right away while volunteers tried to get a trap to the location as quickly as possible.  By using Calming Signals, Kari was able to get Sapphire to settle down and not try to run.  An 11-year-old boy lived at the house, and Sapphire was especially trusting of the boy.  Kari coached the boy on how to act around the cautious dog, and Sapphire eventually let the boy put a leash on her.  She was safe after a month on the run, covering an area of about 60 square miles.  Sapphire was saved because UBS volunteers never gave up on her, and followed every lead.

The original owner and the recent owner have both agreed to release Sapphire to our rescue.  Kari is fostering Sapphire, and she has become comfortable and feels safe.  She is playful with other dogs, and she is gaining confidence in new situations.  Sapphire is spayed, and current on her vaccines.

Although Sapphire spent a month on the run, fleeing in panic in a strange environment, she is not considered to be an extreme flight risk as long as her people take precautions and avoid putting her in stressful situations.  She is kind and gentle, and would make a great forever dog for the right family.  It would probably be best if Sapphire went to a home with no cats.  If you happen to have an 11 year old boy that is kind and gentle with animals, Sapphire could be the perfect dog for you.  Please share Sapphire’s story, and contact UselessBaySanctuary@gmail.com if you think she could fit in with your family.