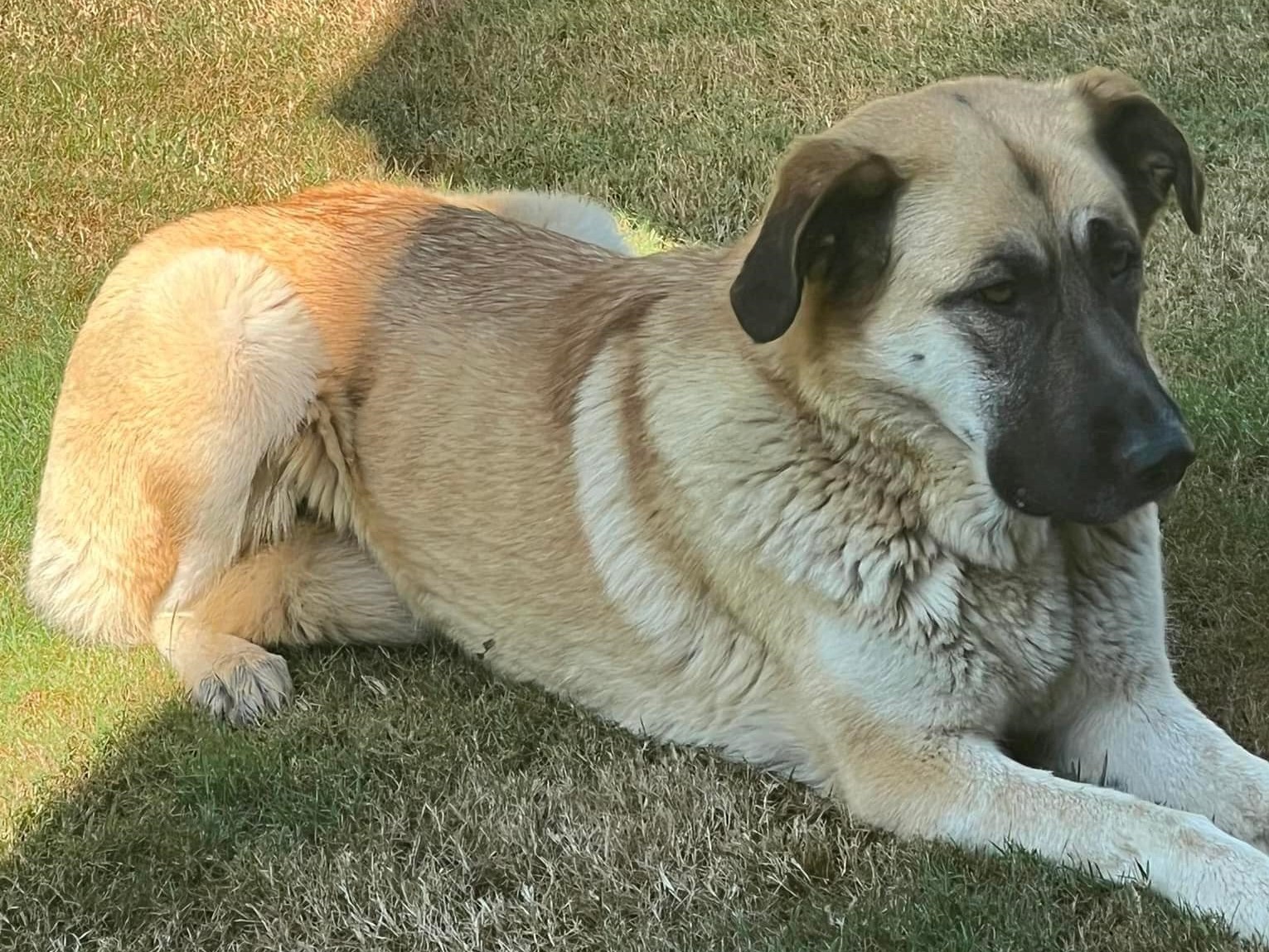 (Adopted) On August 12th, UBS volunteers caught a dog that had been wandering for at least two weeks.  She had been seen over an area of at least 2 miles.  Although I didn’t witness this behavior, if her experience was typical of most stray dogs, she was approached by many people who tried to coax her and grab at her.  When people try this, it can train a dog that anyone who pays attention to her is a potential threat.  I went out looking for her a few days earlier but never saw her.  On this day, we received a report that she was back at a property she had visited the day before, and she was hanging around.

Kari went there first, with her dog Beba.  Kari and Beba were able to make friends with this dog by using calming signals, which in this case means mostly ignoring her.  Kari knows to sit on the ground and not look at the dog you are trying to catch.  By letting this dog come up to her when she was ready, she built trust.  The dog saw that Kari was not going to try to grab her.  Animal control had come out and set up a trap, which the dog ignored.

When I arrived at the address, the dog was following Kari and Beba around.  We went to the grassy yard where they had been hanging out.  I got out a can of Vienna sausage and gave some to Beba, ignoring the stray dog.  This made her want some.  She accepted some sausage when I tossed it on the ground near her, and within a few minutes she was eating out of my hand as I sat on the grass and looked away from her.  She seemed interested in Tino in the car, so I brought Tino out for her to check out.  I had Tino’s ball and also the Vienna sausage, to keep him focused on me.  He can be overwhelming to some dogs.  I managed Tino to keep him calm and not pushy with the stray dog.  She seemed interested and followed him around as he ignored her.

I brought the trap out and set it up near the stray.  She watched me unfold it and set it.  I put the bungee cord on the door so it wouldn’t close when a dog stepped on the trigger plate.  Then I put sausage in the end, beyond the trigger plate, so that Tino would go in and get it.  Tino just barely fits in the trap.  She watched as Tino went in several times to get sausage.  Then I put Tino back in the car.  I loaded the trap up with fresh bait in the end beyond the trigger plate, and I removed the bungee cord so it was set to close.  The stray did one loop around it, checking it out and trying to get at the sausage from the outside, without going in.  This is fairly typical behavior.  I was sitting on the ground about 12 feet away, not looking at her, using my phone to observe her.  Kari was sitting 50 feet away, also using calming signals.  The stray came back to the trap.  She knew she wanted the sausage in the end of the trap.  She stepped in cautiously, backed out once, and then went in deeper.  Finally she stepped on the trigger plate and the door came down.  She was a little too big for the trap.  Fortunately, instead of trying to back out, as some dogs do, the falling door caused her to jump forward a little, allowing the door to close all the way.  It would have been better to use the next largest size, but that trap is very difficult for me to transport.  Once she was in, I sat beside the trap and continued with calming signals, letting her get used to me, showing her that I meant her no harm, and that I understood how she felt.

Why did my trap work when the trap set by animal control did not?  Probably several reasons.  First, my trap was not covered. The animal control trap was covered.  I don’t know why people cover their traps.  It almost never helps, and in many cases it is a deterrent.  As I observed this dog’s behavior, I could see that she wanted to investigate the trap from the outside.  She was circling it, looking into the trap, and also looking through it, to make sure her surroundings were safe.  I never tell people to cover their traps.  I don’t know why so many people do.  If these traps were meant to be covered, then they could just be designed as metal boxes instead of open mesh cages. I will always advise people not to cover their traps, but they think it’s a trapper’s secret, a pro tip, to cover the trap to increase the chances the dog will go in. It’s not necessary and often will reduce the odds a dog would go in.  The second difference was that I demonstrated to her that my trap was safe, by letting her see Tino go into it repeatedly, and nothing happened to him.  Third, Kari and I and the dogs used calming signals with her, to show her that we were relaxed and we weren’t going to lunge at her or threaten her.  The way I was sitting, with my legs out in front of me, there was no way I could get up quickly and do anything to bother her.  A fourth reason that might have helped my trap work was that I made a bread crumb trail leading deeper into the trap.  She was rewarded each step of the way, being brave enough to go a little farther into the trap.  Possibly a fifth reason my trap worked when the other trap didn’t was that I was using Vienna sausage.  Dogs really like this stuff.  I think I could have trapped her with other food, in this situation, but the Vienna sausage probably helped.

In many instances I will move far away from a trap so the dog isn’t aware of my presence at all.  In many cases I will leave the area completely, and monitor the trap with a wildlife camera.  In cases where we are able to be near the dog when we use calming signals, it can actually help the dog go in if I am nearby and just relaxing.  It’s as if I am watching out for her, keeping her safe while she checks out the trap.  She can see that I am calm and unconcerned, so there’s nothing for her to be concerned about.

This dog had been running loose for two weeks, crossing many busy streets.  It is very likely that many people tried to catch her, and made her run farther.  Understanding dog behavior can make it much easier to catch them and help them.  She went in the trap about 2 hours after Kari arrived on scene, and about 20 minutes after I arrived with the trap.  Stray dogs would be so much safer if more people understood calming signals and the best ways to use a trap.

Note: one thing I did wrong in this case was that I didn’t use the larger trap.  Whenever possible, you should err on the side of using a trap that is too big, rather than one that is too small.  Kari had sent me pictures of the stray dog near her foster dog, Beba, and it appeared to me that she wasn’t that big.  I brought a trap that was a little too small because I misjudged her size, and also because the larger trap is so difficult to transport.  You should always try to use a trap that is bigger than necessary.  Use a 42 inch trap for a large cat.  You can use a 48 inch trap for a 4 pound chihuahua if you add weight to the trigger plate.  I would use a 48 inch trap for dogs from 10 pounds to 80 pounds, depending on how they are built.  The 60 inch trap or larger should be used for dogs 70 pounds to 110 pounds.  The kennel trap, 10 feet long and 5 feet wide, should be used for dogs over 110 pounds, or dogs that have learned what a standard trap is.