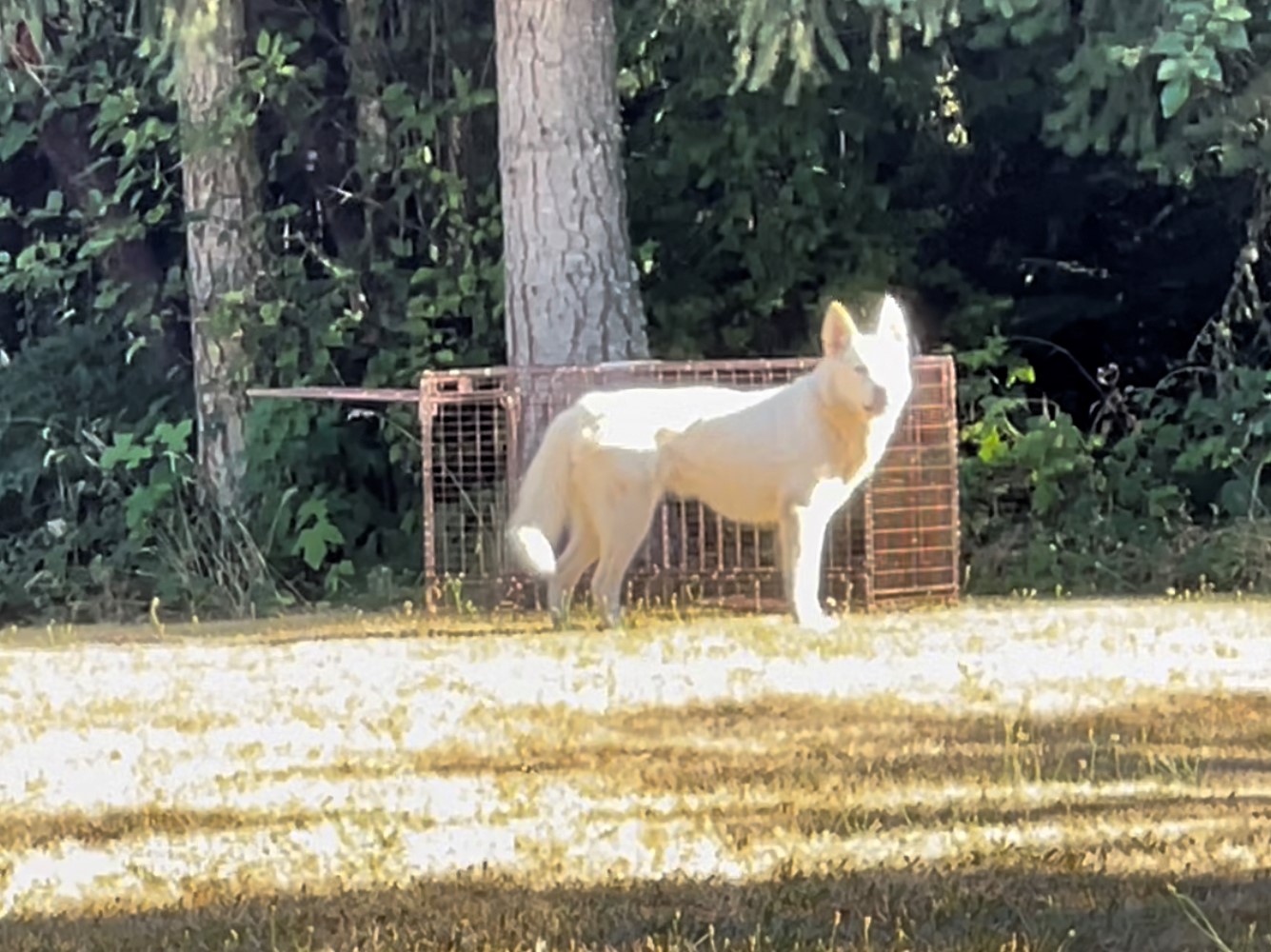 (Adopted) After we caught the girl in Auburn, on Saturday the 13th of August, we went to Eatonville for another dog that had been running loose for a couple of weeks.  He was an intact male, hanging around houses where they had intact females.  He liked to play with dogs, and he accepted treats and food.  This development had large lots, 5 acres to 100 acres, with homes spread far apart.  The subdivision had a network of trails and small parks.  This dog seemed to be using the trail system and the gravel roads to go between houses and food sources.  Again, animal control had set a trap for the dog, which the dog was ignoring.  I didn’t observe how the trap was set, but it was reportedly larger than my 48 inch trap.

We saw the dog as soon as we arrived on Saturday.  Brenda sat beside the road and did calming signals, and the dog approached fairly close.  I got Raphael and Tino out of the car and they played with each other, drawing the attention of the dog.  He watched us for a while, seeming interested, and then he moved down the road, along his usual route.  It took us a while to locate him again, but he was seen at a small park, where he had been seen many times before.  I set the trap there.  I think he was just about to go in, when a car came up the road and distracted him.  He took off to other places he was familiar with.  I left the trap held open with a leash, so he could get used to it, and we planned to come back the next day when we would have more time.

On Sunday, the 14th, when we arrived, he hadn’t been seen all morning.  Our plan was to split up and search for him.  After a short time, a local resident saw him going out of the gated subdivision.  We caught up to him and followed him, trying to attract him with an intact female dog belonging to one of the residents.  He seemed interested, but then went farther up the road and in someone’s driveway.  I thought he might live there, but I talked to that homeowner, who said it wasn’t his dog.  Brenda saw the dog going back towards the main gat of the subdivision.  Then he went into a yard just before the gate.  This was a property with at least 4 dogs, plus horses and chickens.  He had been reported there many times.  They had even lured him into a horse stall and closed him in one, but then he had scaled the six-foot wall of the stall and escaped.

As the dog circled around the house and barns, I talked to the homeowner.  He said we could set a trap there, but that it would never work because the dog was too smart.  I think he wanted me to hurry up and try it and fail, and go away.  His wife had made friends with the dog and he was eating out of her hand.  I set my trap in the shade of a tree, and I asked her to bring her two friendliest dogs out and give them treats near the trap.  She sat on the grass by the trap and fed treats to her dogs.  Eventually the stray came close enough to get treats as well.  The woman tossed bits of Vienna sausage into the trap for her dogs to go in and get, as the trap was held open by a bungee cord.  The stray saw her dogs go in repeatedly to get the treats.  After about ten minutes of this, I asked her to lead all the dogs away from the trap so I could set it.

I put fresh Vienna sausage in the trap, and a trail leading in.  I set the trap to close.  I asked the woman to come back with her dogs and keep them out of the trap.  She was able to sit near the trap, with her dogs lying beside her.  She gave her dogs some treats, and also fed a few to the stray.  He smelled the Vienna sausage.  After a few moments, he started to work his way into the trap, eating bits of sausage as he went.  With the woman and her dogs just relaxing nearby, he went in all the way to get the sausage at the back.  He stepped on the trigger plate, and he was trapped.  He didn’t get too alarmed or upset at being trapped.  The other dogs had shown him that the trap was safe, a special box where you go to get the good treats.  This gave him the confidence to go in.