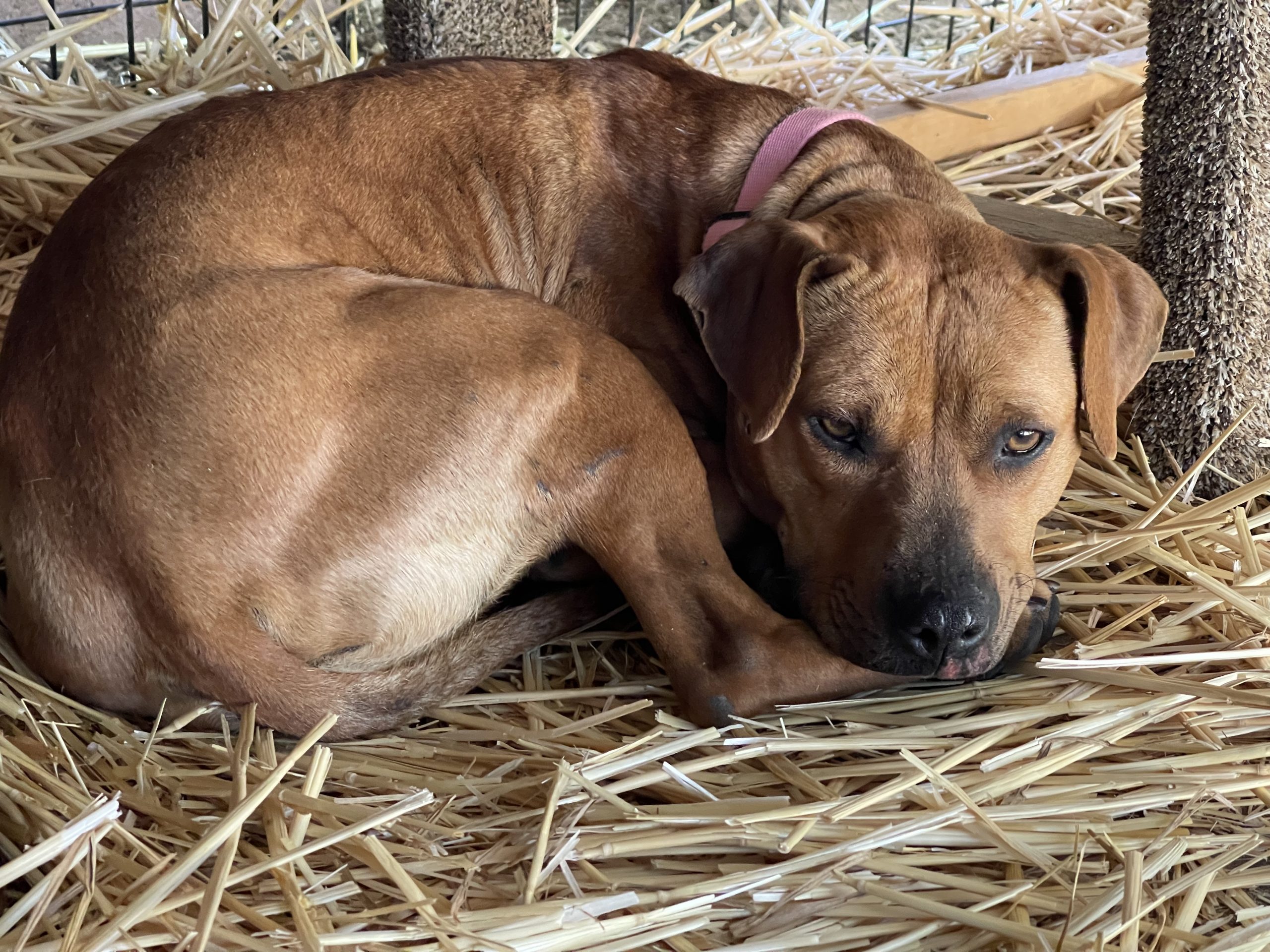 (Adopted) Someone posted a picture of a dog they had seen in the neighborhood.  She is a small pit bull, and she appeared like she might have had puppies.  She was running around an area of about 5 blocks square.  She wouldn’t come to anyone.  Many people tagged me to help her, but I couldn’t come out until the next day.  The next morning, there was a recent sighting reported.  UBS volunteer Diane lives close to the area, so she went out looking.  I got there a couple of hours later, and Diane reported seeing the dog just as I was arriving.  Together, we watched where she went, to get a sense of her pattern of movements.  In these cases, the reported dog often lives nearby, and if you follow her and talk to people, you can usually figure out where she lives.  I followed her for five blocks.  She went into the grounds of a large church, and the people there said they had seen her for two days, but didn’t know where she lived. She went down a driveway to a house, like she lived there, but that homeowner had never seen her before.  We lost sight of her for a while, and then she showed up again on the main street.  We followed her into a little cul-de-sac neighborhood.  A homeowner had food out for her.  They said they had been feeding her for a week.  She would disappear into the green belt next to the development, and they assumed she had puppies in there somewhere.

After following her around and talking to many people, I developed a map of where she had been seen over the last two weeks.  One homeowner said they had been seeing her in the yard at least four times a day, and she said we could set our trap in her yard.  The first time the dog came by the trap, she cruised by like she wasn’t interested in the Vienna sausage in it.  We knew of at least three people feeding her and giving her water, so it wasn’t too surprising that she would pass up the food.  I set the wildlife camera to watch the trap, figuring she would probably go in overnight, when everything was quiet.  At 10:02 PM, the camera caught her showing some interest in the trap.  At 10:29, she was all the way in, trapped.

Diane found a neighbor to help her lift the trap into her car, saving me a trip.  Diane has a very handy outdoor kennel, which is covered and large, safe and comfortable.  Many a stray has spent the night in Diane’s kennel until we could get them home or to a foster or to the shelter.  Diane let the dog out into the kennel, and scanned for a chip, which she didn’t have.

When I came to see the dog in the morning, my plan was to get a martingale collar and a harness on her, and walk her around the neighborhood where she was found, to see if she would lead us to any puppies.  When I entered the kennel, she was calm, but not interested in getting too close to me.  She took treats from my hand, but then she settled down a few feet away, out of reach.  I spent two hours with her, letting her get used to me.  Mostly I ignored her, and I sat and read a book on my phone.  She was trembling periodically, like she was nervous or cold, even though it’s the middle of summer.  Eventually she fell asleep for about 10 minutes, and then woke up to see me still there.  I remembered doing this with the ninja turtles, Donatello, Leonardo, Michelangelo, and Raphael, to let the puppies get used to me.  I have found it to be the case with many dogs who are not ready to be handled, that if you let them fall asleep near you, and you stay exactly where you were when they fell asleep, and when they wake up you haven’t moved or tried any funny business, it really helps them trust you.

I started calling her Hazel, because her eyes and fur were somewhat of a hazel color.  Anyway, she looked the color of all the hazelnut shells squirrels were dropping in my driveway.  She didn’t respond to the name, but she didn’t object.

She let me pet her a little.  She had quite a few scrapes and wounds that were healing. I put the collar on her and let her get used to it for a while.  When I attached the leash, about 15 minutes later, she seemed like she was ready for me to take control.  She hadn’t warmed up to me completely, but she was willing to be responsive to whoever was holding her leash.  A short time later, I got the harness on.  I walked her around the fenced yard and let her sniff around.  She seemed like she was looking for a way out, but not desperate to escape.  When I took her to the car, she didn’t want to get in.  I scooped her up and set her on the seat, and that was fine with her.  Once I got into the driver’s seat, she seemed quite relaxed.  She rested her chin on my arm, and she was ready to go with me wherever.  I probably could have gotten her leashed and in the car sooner, but taking two hours to go at her pace helped her relax and trust me.

We drove to the neighborhood where she had been running around, and I parked next to the green belt where she had been seen going in frequently.  She didn’t want to get out of the car.  I gently pulled on the leash and she came out.  We walked into the little park.  She seemed like she recognized her favorite places, where she had napped in the shade.  I played a video of a puppy whining and crying.  She tipped her head at the sound, and she seemed interested, but she didn’t lead me anywhere. We walked around the green belt behind the neighborhood and came out at the south end of the development.  It was a cluster of about 60 new homes in what had probably been a farm field.  Along the south side of the development, she went to a house like she really wanted to be there.  I rang the doorbell.  The homeowner came out and said she had never seen the dog before.  Hazel still wanted to go in the house, like it was home.  The homeowner seemed touched, that this sweet little dog wanted to come live with her, but eventually I was able to pull Hazel away from the door.  At the next house, Hazel said that was her home.  Again, I rang the bell. A woman came to the door holding her brown poodle.  She said she had never seen the dog before.  Hazel seemed certain this was her house, and if I hadn’t held onto the leash, she would have walked right in and made herself at home.  She acted this way at five houses on the south side of the complex.  At a sixth house, no one answered the door.  At the last house in that row, the homeowner seemed like he was about ready to let Hazel just come in and live there, even though he had never seen her before.

Hazel only acted that way in that stretch of six houses on the south side of the southernmost street.  She didn’t want to go into any of the other houses.  Several people saw us in the street.  They recognized Hazel from recent days, running up and down the streets, but they hadn’t seen her before then.  I walked her back to the car.  I scanned her for a chip one more time, thoroughly, from head to toe, and didn’t find one.  I had put out a call for a foster, but no one had replied.  This wasn’t too surprising, since the shelters are crowded and every nonprofit rescue is struggling to find fosters at this time.  I started driving her to the shelter, which made me sad.  I thought the shelter would take good care of her, but it’s not a home. Hazel was ready to walk right into those homes on the south side, and make herself comfortable.  The shelter is not a home.  As we drove to the shelter, she rested her chin on my arm, just like Tino normally does.  She was such a sweet, good girl, much calmer than my crazy dogs.  When we got to the shelter, she was happy that she actually got to go in the door of a building.  I felt like I tricked her when she saw that it was an institutional place, not a comfortable home.  Still, she didn’t complain when I handed her over to the staff.  One of the staff said they didn’t think she had puppies in the bushes somewhere, which I hope is true.

Of course, I would have loved to foster Hazel myself, but our house is really full with five dogs.  Hazel might not be able to relax with my crazy crew.  If I had been Hazel’s owner and I had lost her, I would be doing everything I could to find her.  Why was no one looking for sweet Hazel?  All she wants to do is sleep on your couch and go for a walk now and then.  She is a perfect angel.  If her original family is not looking for her, for whatever reason, I’m sure she will find a good home.