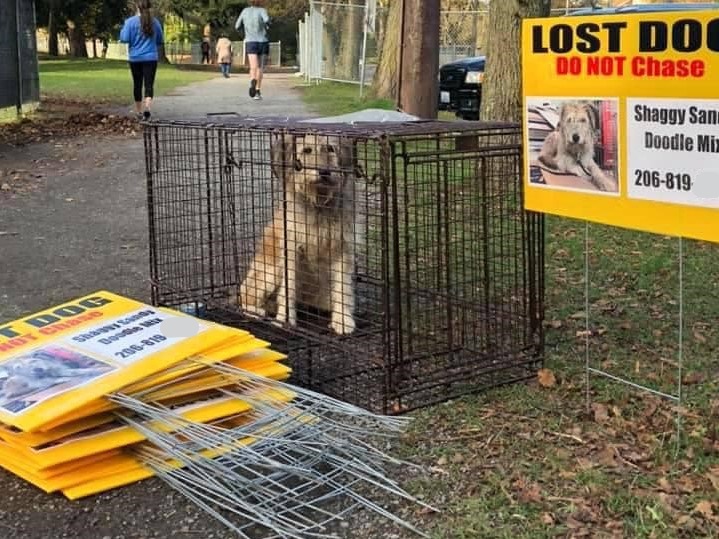 (Adopted) Buttercup was originally posted on Lost Dogs of King County after she was brought in to Seattle Animal Shelter. A UBS volunteer recognized her as a new dog of an acquaintance, alerted them she was at the shelter, and Buttercup was reunited the next day.

Two weeks later, someone posted a very scared dog hiding in their bushes. She was identified as being Buttercup again. A Lost Dogs of King County member was able to secure her and take her to a 24-hr vet to hold until the owner was contacted. When the owner arrived, Buttercup escaped in the parking lot. Her owner alerted the UBS volunteer, who posted on Lost Dogs of King County.

Useless Bay Sanctuary volunteers jumped in with searching, making flyers and signs, and tracking sightings. Three days later, UBS successfully caught her in a humane trap. Buttercup’s owner surrendered her to UBS. She was fostered by a UBS volunteer for several months, until ultimately adopted by another UBS volunteer.

Her escapades didn’t end then. While still adjusting in her new home, Buttercup managed to dig out below the fence and escaped again. UBS volunteers immediately came together searching on foot and by car, posting on all groups and platforms, and making flyers and signs.

Unfortunately, Buttercup’s GPS collar was found in a nearby yard, which made the search more urgent. After a full day of searching, volunteers were headed home when there was another sighting. Terri was headed home with Gunner, another UBS foster dog who she had brought as a magnet dog. Terri, who had fostered Buttercup, turned around and immediately headed to the sighting location, and met Buttercup’s owner there.

Using calming signals, lots of patience and treats, and Gunner as a magnet dog, they were able to secure Buttercup on leash. She was kept on leash for weeks, even in her backyard, during which time the fence was massively reinforced. Buttercup is now closely bonded with her new mom and siblings and living her best life.