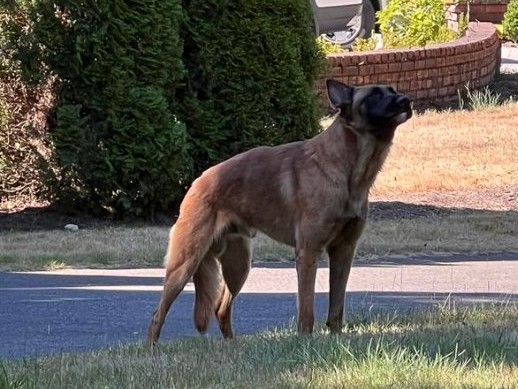 (Available for Adoption) Several Redmond residents reported an injured Belgian Malinois running scared through their neighborhood. They called Animal Control, who set a trap the following day. Their trap was unsuccessful, and neighbors grew concerned that the dog’s injuries and limp were getting worse.

Useless Bay Sanctuary volunteers put out signs to generate sightings to help pin-point where he was hiding and establish his pattern. Several days later, volunteers found him in a neighbor’s yard. His injuries were so bad, he could barely walk. He allowed them to get a slip lead on him, then they loaded him in to a nearby wagon to transport him to their car.

He was taken immediately to the vet, where they discovered Grant had been attacked by a large animal and had deep infected on his neck and leg. He had a fever and was malnourished. He is currently healing in a foster home, while we continue to look for his owner.