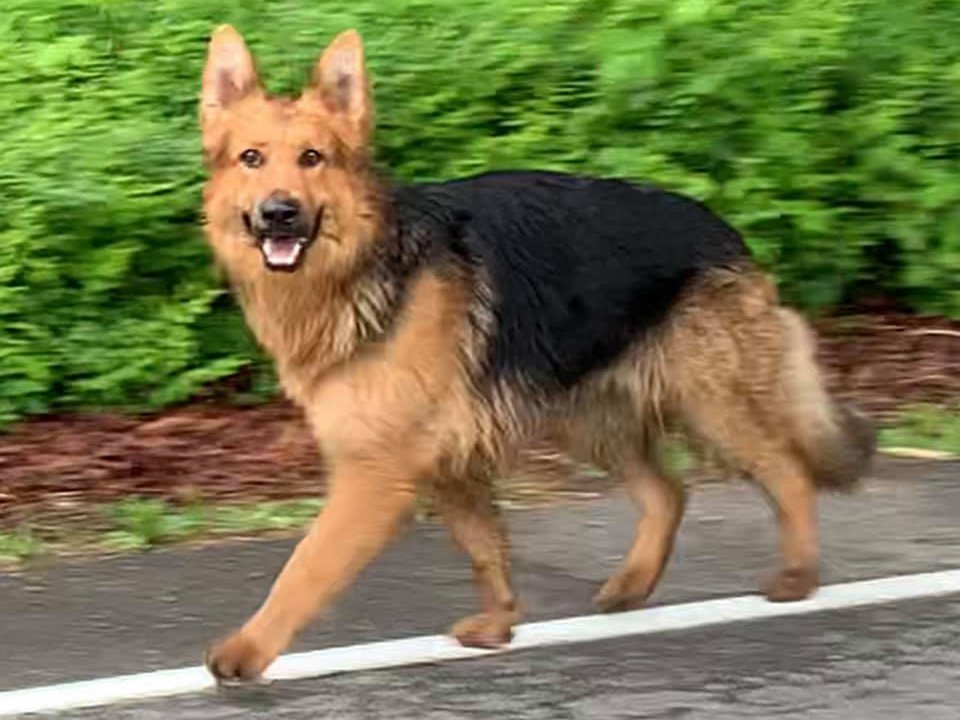 Through a Facebook post, we learned about a possible stray dog in Auburn. It took a couple of days to catch him. This write-up of our actions can help you if you find yourself in a similar circumstance. I would suggest you watch the 9 minute video first, then read this, then watch the video again.

Useless Bay Sanctuary is uniquely equipped to help a dog like this one. We have tools that an individual may not be able to afford on her own. We also have collective experience, a volunteer base, and networking connections. Without our help, this dog may not have been helped for a very long time, if ever, and the longer he was out there, the more he would be at risk of getting hit by a car on a winding country road where people often speed. Our nonprofit was founded with just this type of dog in mind, a dog that probably would not have received proper help if UBS didn’t exist.

After I first heard about this dog needing help, I wasn’t able to get out there until the next day. Early Friday morning, I drove to the area to look for him, and he just happened to be trotting down the road when I pulled up to the location of the reported sighting. That was very lucky. When I saw him from a distance, I planned, right away, to get a video of him. It’s a good idea to be adept at using your phone’s camera, so you can capture pictures and video quickly, without fumbling around too much. Note: I took this video while driving, which, if you are volunteering for UBS, I would never ask you to do. Always be safe, and in general I don’t think you should fiddle with your phone while driving. I checked my surroundings and made sure no cars were coming before I shot this video. I chose video instead of pictures for two reasons. First, video captures a dog’s behavior more than still pictures would. Second, in situations where you don’t really have much time to compose a picture, shooting video can be a good way to get the best picture. By scrolling through the video, I was able to find the frame with the best image, which made a good still picture. This picture is useful for Facebook posting and other uses.

As you can hear in the video, my 97 pound Gerberian Shepsky is talking in the background. He was just along for the ride, as we had just finished a search. His presence probably wasn’t calming for the stray dog.

Once I shot a short video, I turned around to follow the dog. Just at that moment, about ten cars passed through the quiet area, and in the traffic, I lost track of him. I had an idea where he probably went, but I couldn’t find him again in 40 minutes of looking around. I went home and got the 60 inch trap to set, and a wildlife camera.

Later in the day, I came back with the 60” trap. I looked around the area, with Diane Radford, who lives not too far away and often helps with stray dogs. We didn’t see the dog, but I saw footprints in the mud leading to a large abandoned property. Looking at the aerial photo, it appeared that the acreage up on the hill had been cleared and graded for a new subdivision, but work had stopped and the blackberries had grown over all the lots. The subdivision had a deluxe concrete paved entrance which had been overgrown with weeds. It was blocked off with decrepit barricades and an old rope pieced together from shorter segments. It appeared no one had visited the property in many years, and it was the perfect place for a nervous dog to hide out and avoid people. It would also be the perfect place to dump a dog without being seen. I didn’t jump to the conclusion that he had been dumped, but it certainly seemed like a plausible explanation for him being there, in the middle of nowhere.

We learned that someone a quarter mile away was a breeder of German Shepherds. Diane talked to that person, who said it wasn’t her dog, but the dog had been seen in the street for several days.

Diane and I set the Tru Catch 60” trap on the abandoned property, well away from the road. Although the concrete appeared flat, the trap was tippy no matter which way I oriented it. I put a stick under one corner to stabilize it. It’s possible the trap is bent. I set the trap and tested it. I baited it with hotdogs, with most of the meat behind the trip plate, and a trail of hotdog bits leading in. I would have liked to set a wildlife camera. However, there was no cell service most of the time, sometimes you would get one bar if you moved around. I didn’t think the wildlife camera would transmit pictures, so I just set the trap with no camera. I think we set the trap around noon or one.

Diane came back about 8 PM and saw the dog. The trap had been triggered, and it looked like he had gone in to eat most of the hotdogs, but maybe he bumped the door. Video Diane took showed that he could fit in the trap if he kept his head down, but if he raised his head or tail, that would bump the door. We don’t know why the trap failed, but it’s probably because he was a little too big for the 60” trap. My plan was to come and set the Kennel Trap that night, after dark, and let him go in to eat, but not set it to close. Then we would re-bait it in the morning and set it to close. I didn’t get around to setting the trap that night. I brought the kennel trap in the morning.

Diane got there at 5:30 Saturday morning, just a few minutes before me. She was having good luck attracting him with food and Calming Signals, so I stayed away and let her work. After at least 20 minutes of this, it seemed like he would allow our presence, but he didn’t want anything to do with the leash. Diane had chicken taquitos from Azteca, which the dog really liked. I approached after a while, to see how he liked me. Some dogs prefer women, and some prefer men. He seemed to like me okay, but he preferred Diane. Part of Calming Signals is to sit on the ground. Diane couldn’t get up and down off the ground easily, so she brought her own folding chair, which was a great idea. This allowed her to sit down and be relaxed, so the dog could feel relaxed. I sat on the ground nearby. As we sat there, building trust with the dog, I ran through the options.

The big advantage to performing this sort of capture as a nonprofit group, as opposed to an individual working alone, is that it allows you to have many tools at your disposal. Many people end up doing the wrong thing when trying to capture a stray dog because they don’t have all the best tools at their disposal. In my car I had a magnet dog, Fozzie, a snappy snare, a catch pole, a fifteen foot net, a chip scanner, a wildlife camera, a can of Spam, a rubber ball for playing fetch, and the panels of the kennel trap were strapped to the top. I had my phone and its camera, which is one of the most useful tools you can have to catch a stray dog. Your phone can link you to a network of volunteers, which is helpful for checking out potential leads or asking for help. The phone’s camera is also very useful in gaining trust with the dog and keeping him calm.

When I help a dog like this, one of my primary objectives is to read the dog. I want to notice his movements, his facial expressions, how he holds his tail, how his ears move, his eyebrows, if he yawns. I want to observe him without making him feel like I am staring. If you stare at a dog, it can really make him uneasy. It is best to make brief eye contact and look away. Let him see your face, but you are looking to the side, seemingly not paying attention to him. This helps him relax. You are looking at your phone, as if you might be on Facebook or texting a friend, but really you are using your camera to observe the dog. As long as you hold the camera down, with a relaxed arm, and angled up at the dog’s face, in most cases this will calm the dog and let you observe him closely. You can record video or take pictures, or just see the live view of the camera without recording.

As we sat with the dog, feeding him bits of chicken taquitos, you could see him relaxing and becoming accustomed to us. I sat on the ground near where Diane sat in the chair, so he could comfortably keep track of both of us without having to worry. He didn’t want to be touched at first. Diane was able to touch him by offering him food and then coming up with her hand below his chin, to gently rub his chin. Most people make the mistake of putting their hand over the dog’s head. It is best to offer your hand down below his mouth, to rub his chin, his cheek, or his chest, where he has the option to bite you if he feels pressured. It is important to watch his reactions and listen, to make sure you don’t get bitten. I have been bitten at least 8 times, and I can tell you from experience that there is almost always a warning from the dog before he bites, if you are paying attention. I haven’t been bitten in about five years, so I must be getting better at reading dogs.

Even after he allowed Diane and me to touch him and pet him, he still didn’t want the slip lead to come over his head. We started working on coaxing him into the car. He seemed like he would do it eventually, if we were patient. We tried various configurations of doors open to see which he liked best. After at least an hour of this, I had the idea of playing fetch with him to get him to relax and become accustomed to us. I went and got a ball from my car. He liked playing fetch, even though he was a little hesitant at first. I bounce the ball for him, so he could see it easily. He pounced on it like a kitten. The first time he brought the ball back, he didn’t want to give it to me right away. The next few throws, he gave me the ball quicker. I hope you can see, in the pictures and video, how his face and his body language become much more relaxed over time. After about fifteen minutes of fetch, we tried luring him into the car by tossing the ball in, with the added incentive of chunks of spam. Spam and a rubber ball were the key, and he finally hopped in. Once in the car, he seemed much more relaxed, and ready to go for a ride.

If you find yourself in a position to help a dog like this, and you don’t have the tools and resources that UBS has, you can often help a dog just using calming signals, treats, your phone, and patience. If you need more help, UBS is always here to help stray dogs in Western Washington.