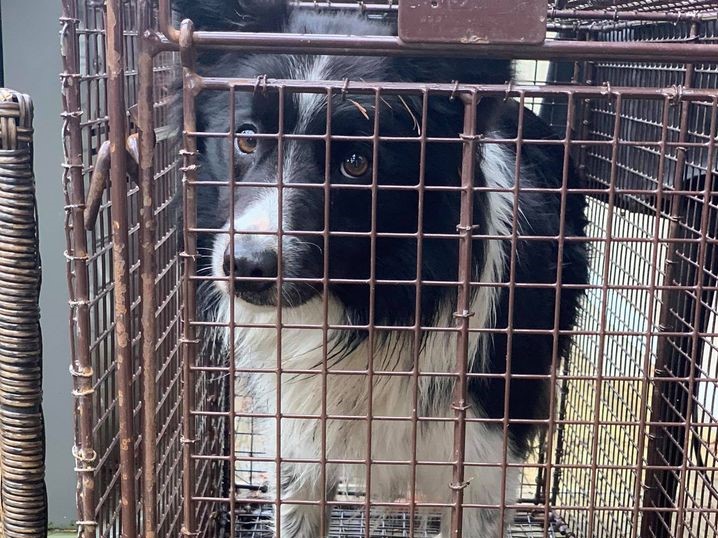 (Adopted) Sometimes we get creative in our trapping methods. UBS was notified about an injured dog in Kent. She wouldn’t put any weight on her left hind leg, and she would growl and snap if anyone tried to put a leash on her. (It turns out she is a sweet and gentle dog, and she was probably just snippy because of the pain.) She came to rest on someone’s deck, near a busy road. Most likely, she had been hit by a car, and probably has a fractured pelvis.

When I got there, she was still on the deck, on a blanket the homeowner had provided. She moved away from the stairs when she saw me approaching with the humane trap. Her body language and muttering told me she didn’t want me to get too close. Also, a healthy border collie could easily have jumped over the deck railing to escape, so I knew her injury was restricting her ability to run and jump. My goal was to capture her with the least amount of stress on her.

I used the patio furniture to create a visual barricade, and I placed the trap in the middle so that it appeared to be an avenue of escape. I put hotdogs in the trap, even though this probably would have worked without any bait. Then I slowly moved toward her, walking backwards, gradually pressuring her space, until she moved out of her corner of the deck. She limped over to the barricade, saw the trap as a potential opening, and walked right in. She was safe, with no need to wrangle her with a leash or a catch pole, which would have upset her.

They call them humane traps because they are designed to avoid injuring a dog when you catch one, as opposed to other types of traps which may injure or kill an animal. I have trapped over a thousand cats and dogs in humane traps, with zero injuries. However, I also think they are humane traps because they allow you to catch certain dogs with the least amount of stress on them. Our experience with helping thousands of dogs allows us to choose the method of capture that is best for the dog. Our inventory of equipment gives us options. We are always focused on the best care and the best outcomes for stray dogs.