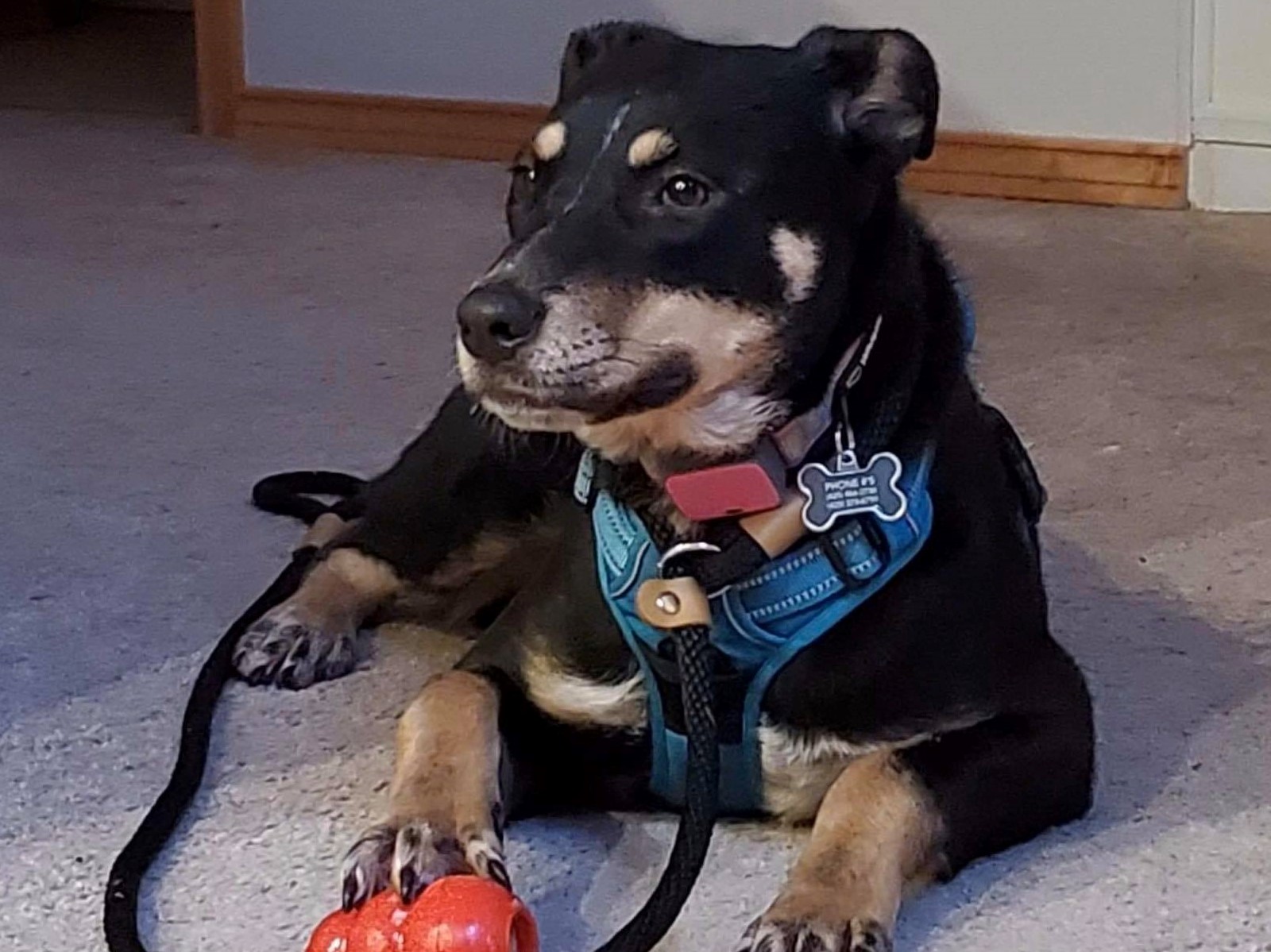 Martha is a shy, sweet dog, new to the area, a rescue. Every day, rescue dogs are brought into the Seattle area from places like California, Texas, Korea, and Hawaii. Although these dogs are coming to a better situation, in many cases escaping death in a high-kill shelter, the transition to a new home can be overwhelming. It’s not uncommon for these rescue dogs to try to escape just because of their general anxiety and their history of being passed along from one stranger to another. How is a dog supposed to know this is her forever home? Like many dogs before her, Martha backed out of her harness and escaped.

Martha was seen around her home in Monroe, near the Fairgrounds, for several weeks. She ate food left out for some possums. She was seen trying to take a nap on someone’s deck. Usually, when she realized anyone was noticing her, she ran away. A dog on the run can be conditioned that if a human notices her, they try to catch her. This can make a lost dog very hard to catch when she runs away the instant she knows someone is looking at her.

For the next three months, Martha was spotted over a portion of Monroe totaling about 9 square miles, from Roosevelt to Fryelands, and around the airport and fairgrounds. People reported seeing her probably at least 100 times in three months, and they called the number on one of the dozens of large, colorful signs up around the area. Martha’s owners and volunteers set humane traps for her in four locations, but she moved on without showing much interest in the traps.

One reason Martha probably wasn’t interested in the traps was that she wasn’t losing weight. She found plenty of food, most likely where people were feeding cats or raccoons. Martha eventually settled into a zone around St. Mary’s church, with many sightings over a three week period. Repeated sightings showed her pattern of movements from one safe place to another, apparently from one food source to another. Because she avoided our traps, we set up a plan to trap Martha in a yard she liked to visit.

Sunday morning, January 26th, 10 volunteers gathered at St. Mary’s at 5 AM to go over the plan. Once Martha entered the yard, three people would come up from the south, quickly and quietly, to block that hole in the fence. Two more people would come to the northeast corner to block that gap in the fence with a large net. Once the two main entrances were blocked, four more people would block other potential escape routes. A spotter would stay in a car, in case she escaped, to see where she went. While waiting for Martha to enter the yard, the volunteers staked out Martha’s known routes to and from that yard. For six hours, the team kept watch, ready to spring into action, but Martha decided to sleep in, wherever she was.

We called it a day, because Martha was almost never seen during the middle of the day, and she was unlikely to come to the yard again until dark. Before we left, we set up the giant trap, a kennel, 5 feet wide and ten feet long, modified with a door that closes automatically when the dog trips a light beam. Our goal was not so much to catch her right away, but to just get the trap near one of her known routes, and to have her not run away from it. We had several wildlife cameras watching.

The first night of the big trap, Martha looked at the cameras with an expression of alarm and unease. She seemed interested in the big pile of chicken and hotdogs, but she didn’t stick around long. The second night of the big trap, we placed most of the food outside the trap, in order to keep her interested in the trap, and gradually get her used to it. We also placed a few empty cat food cans around, to make it seem like the cats were being fed there, indicating a safe place. When she showed up on camera the second night, she looked more relaxed. It seemed like a strategy of gradually getting her comfortable with the trap was going to work, and we could get her all the way in over the course of a week or so. Then she surprised us by just wandering right into the trap and tripping the light beam, releasing the spring-driven door. Martha was trapped after three months on the run. Her owners got there right away because we saw the moment she was captured, on the cellular cameras. A quick response at 2 AM ensured that she wouldn’t try to dig out.

Martha just froze after her owners got there. She had only known them for three days before she escaped. They eased her into a kennel for transport, and took her home. Once safe inside the house, Martha relaxed fairly quickly. After 24 hours in her new home, she seemed happy and normal, as if she hadn’t spent three months running around like a feral dog. Martha looks good in her harness and her collar with the GPS tracker, and she is now on track to have a normal, happy life.

Martha was saved because her owners never gave up. They sometimes went for a week or two without any sightings, and they feared she was dead. But they kept putting up new posters and following up on the leads. About a dozen volunteers invested hundreds of hours looking for Martha and following up on leads, setting traps and cameras, planning strategies. Useless Bay Sanctuary played a key role in Martha’s capture because of our experience on similar cases, knowing the strategies most likely to succeed, and instructing people on what actions NOT to take, which have historically proven to make a capture harder. Also, UBS volunteers know that we can succeed in these time-consuming cases if we just don’t give up. We don’t succeed every time, but when we keep working on a stray dog, we usually capture them eventually.

Martha taught us more about catching a stray dog, and we can use this experience on the next difficult dog. Our experience and our volunteer base made Martha’s capture possible, but it was also our donors that played a key role. The traps and cameras used for Martha cost about $5,000, all together. This is a cost most individual dog owners can’t easily spend in recovering their dog. UBS is a community resource, having specialized, effective equipment on hand when needed. It took a village to capture Martha. Please contact us if you would like to join our volunteer team in the Puget Sound area, and your donations are always welcome.