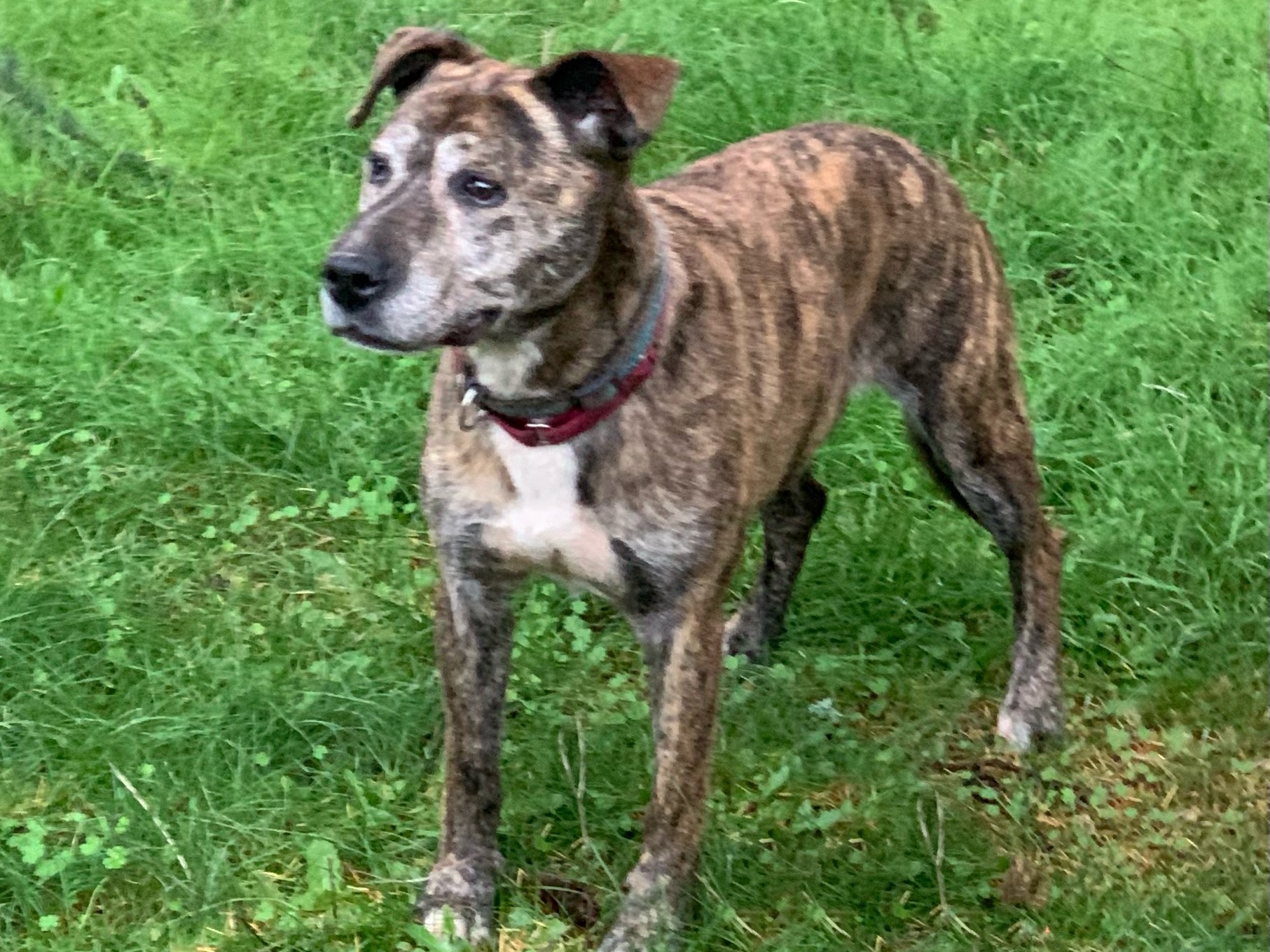 (Adopted) When I first learned about Katie, I knew that we could help her.  She was seen wandering in Kent, coming to food that was left out for a family of raccoons.  Many people reported seeing her around the area for weeks.  Useless Bay Sanctuary has the tools and training to help dogs like Katie when others can’t.

I set a trap and camera for her.  She showed up on my camera, checking out the humane trap baited with hotdogs, but she wouldn’t go in.  Eventually she stopped coming by the trap, although she was still seen in the area.  Weeks later, we learned that she was visiting a particular house every day, where a resident set out food for feral cats.  Katie had her own bowl there and her own food, so she wouldn’t take all the cats’ food.  It’s probably why she wouldn’t go in the trap at the other location, since she had plenty of food at the feral cat feeding station. I set the humane trap near there, and on November 15th, 2020, at 4:51 AM, I got an alert on my phone and saw the picture transmitted from the camera.  Katie was caught.

I got there as soon as I could.  She had been chewing on the wire mesh of the trap, and she would have chewed her way out eventually.  We loaded her into the car and drove her to a volunteer’s garage, where we could get her out of the trap without risking an escape.  She was not unfriendly.  She let me pet her, but she was always looking for a way to escape.  She let me scan her with the microchip scanner, and I was able to read her chip number.  After a few phone calls, I learned that she had escaped on August 1st.  She had been adopted from the Humane Society, and she escaped from her new home within 5 minutes of arriving.  She had been wandering that neighborhood for 3 months before we caught her.

Her new owner was relieved to learn that Katie was okay.  I drove her to the owner’s home, and I took her into the owner’s garage while still inside the trap, to avoid any chance of escaping.  When Katie came out of the trap, she showed no sign of familiarity with the owner, someone she barely knew, and again she seemed intent on escape.  I asked Katie’s owner to take her in the house so she could let me out of the garage.  I told her I would like to check the yard to make sure the fence had been repaired and that Katie wouldn’t escape again.

I came out of the garage and was astounded to see Katie standing in the front yard! The front door had been left wide open, an oversight on the owner’s part.  I went into the yard and tried to calm Katie down, to keep her from trying to escape.  She checked all around the fence line, and in less than five minutes, she found a week spot and pushed under the fence.  She was gone again.

I didn’t bother chasing after her because I knew that would do more harm than good.  I was fairly certain she would return to the areas she was familiar with, from her 3 months wandering the area.  I immediately created five large signs with Katie’s picture and posted them at key intersections.  People in the area posted about Katie on the local social media.  Before long I received several calls that she was seen in the area, two blocks from her owner’s home, near the feral cat feeding station.  I began the long process of setting up the big trap.

Once a dog has gone into a regular humane trap, they won’t go in a second time.  For this reason, Useless Bay Sanctuary has invested in building a large kennel trap.  This trap is 10 feet long, 5 feet wide, and 6 feet tall.  To dogs, it doesn’t look like a trap.  It has an optical switch, and when the dog goes all the way to the back to get the food, she breaks a light beam, releasing a magnet and letting the door swing closed.  Although this trap breaks down into panels, it’s not the easiest thing to transport.  It takes at least half an hour to assemble.  We got the trap set up by the next day.  A camera was set to see if Katie would go in.  The door was not set to trigger at first because we wanted Katie to get used to the new trap.  Also, I wanted to be nearby when the trap closed, knowing that she would try to dig her way out if left alone in the trap.  Soon she showed up on camera, eating from her bowl near the entrance.  Over the next few days, we moved her bowl deeper into the trap each day to get her acclimated to the trap.

On November 21st, I set the trap to close, with the magnetic door release connected to the battery and the optical switch.  Katie’s regular food was placed in the back of the trap, along with several slices of pizza.  I didn’t have to wait very long for her to show up.  She circled the trap a couple of times, and then she walked right in for pizza.  When the door closed, she panicked a little, but I got there quickly to calm her down.  I went into the trap with her, and used calming signals to try to ease her fears.  She didn’t completely relax and kept looking for a way to escape.  I eased her into a carrier for transportation, and loaded her into the car.  Katie was safe.  Shortly after she was secured, I learned that at least two neighbors were tired of her being in their yards, and had said they planned to shoot her if they saw her again.  We caught her just in time.

At Useless Bay Sanctuary, we have caught hundreds of dogs that were difficult to catch, that other people did not have the tools or experience to catch.  We knew that, if Katie escaped again, we absolutely would not be able to catch her a third time.  We had used all of our tricks, and she would be wise to them next time.  If Katie escaped again, it would most likely be fatal for her.  We talked to the person who had adopted Katie in August, and we helped her see that Katie was really not a good match for that situation.  Katie needed someone who could absolutely, without a doubt, prevent her from escaping until she could settle down and learn to be part of a family again.  There are plenty of dogs that are not so determined to escape.  If the owner would allow us to save Katie’s life, then she would have room for some other dog at the shelter, saving two dogs instead of one.  She eventually agreed, and we took Katie to an experienced foster who could be absolutely certain Katie would not escape again.  Katie has been with our foster for over a year.  She has been to the vet and is in great health now.  She likes other dogs, and loves the people she knows.  Katie is now ready to go to her permanent home.  Although she has calmed down quite a bit from when we first caught her, and is much less of a flight risk, of course we are still looking for a home where there’s no chance she could escape, given her history.  You can see Katie’s PetFinder profile here.

I have my own dogs like Katie.  Sky and Viktor are both UBS dogs, saved from the streets after considerable effort.  Sky is sleeping near me as I write this, and although she seemed almost feral when she came to us seven years ago, she is quite comfortable now.  Sky has accidentally gotten out of the house a couple of times over the years, and she quickly returned, knowing this is her home now.  Viktor was an escape artist when we first got him, but now I can drop his leash and he just waits for me.  Katie will  feel this way about her new family, but it might take some time for her to settle in.  If UBS had not helped Katie, her chances of survival would have been very low.  With our specific experience and equipment, and with the help of our generous donors and volunteers, we can help dogs like Katie when no one else could.  Check out Katie’s profile, and if you can’t adopt her yourself, share her link with someone that is ready for a sweet dog.