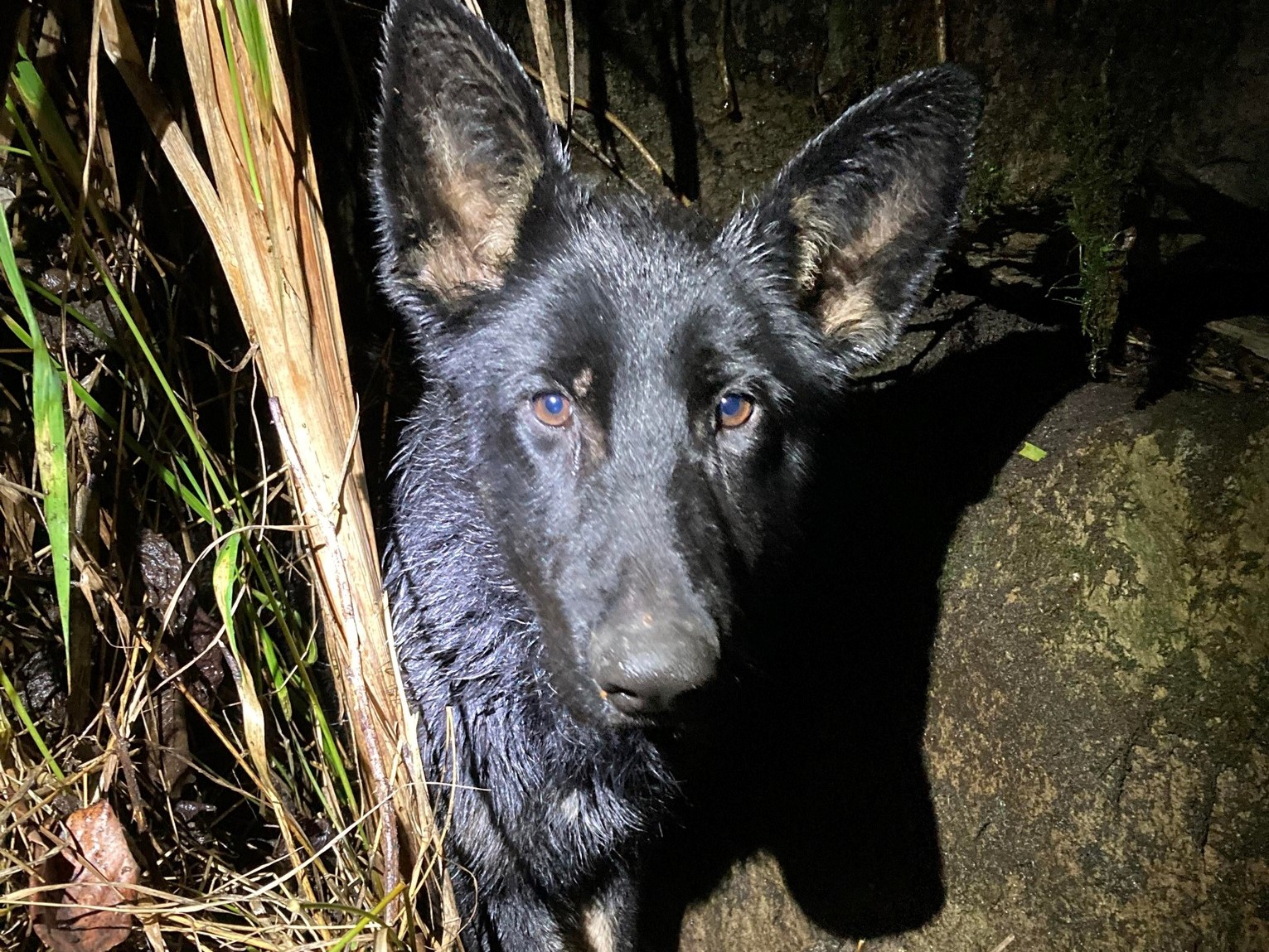 (Adopted) Christmas Eve.  It’s 39 degrees and raining.  Although the speed limit on West Valley Highway is 40, many cars roar past at much higher speeds.  My feet are completely soaked from wading through the swamp in running shoes.  Once my eyes adjust, I can see okay because of the streetlight.  Kari is sitting next to the retaining wall, lost in shadow, and she quietly hands me a few Vienna sausages.  I immediately recognize the peculiar gritty slime of the liquid from the can, and the repulsive smell.  I break a chunk off of one of the sausages and kneel down in three inches of swamp water.  I slowly extend my hand through the screen of reed canary grass, and her sweet little black face gently nibbles the sausage bit from my hand and licks up the gelatinous goop.  I feel very confident we will be able to help her.  After our stray has eaten the last of the Vienna sausage, Kari starts handing me globs of canned cat food.  I lie down on my side in the swamp water, look away from the puppy, and extend my hand out.  The black dog is about 45 pounds and stands over me.  I am sprawled below her in the channel between the rushes and the brambles.  She comes out of the darkness of her little den between the retaining wall and the thick brambles, and she eats from my hand.  She lets me pet her under the chin a little and then pulls back.  I know I will get cold if I lie in the swamp for very long, but after the initial shock of icy water, I’m not uncomfortable.  I’m lying in a swamp with a volunteer and a stray puppy, feeding her globs of disgusting cat food from my hand, cold rain falling on my face, and I’m thinking this is this best part of Christmas.  I don’t always get to save every dog, but I feel confident we will save this one.

Tino is in the car, warm and dry.  Because she is not warming up to us fast enough, not fast enough for us to avoid becoming hypothermic, anyway, I consider bringing Tino out, as a magnet dog, to try to attract her.  She looks like a mini Tino, and it seems like they ought to be kindred spirits.  Although Valentino is 130 pounds, he is really a big baby.  I think he will probably bark at this nervous girl who is less than half his size.  Would she recognize that his loud barks are just dorky playfulness?  Or would she be intimidated?  Since I don’t know the answer, I can’t take the chance.  Although Tino would think it was great fun to splash around in the freezing swamp, he has to stay in the car. The best alternative, since we can’t sit in the swamp all night, is to use the humane trap.  One problem with that is that by this point she has eaten half a pound of hotdogs, a can of Vienna sausage, and half a can of cat food, plus whatever the Good Samaritans fed her throughout the day since she was seen at 2 PM in the swamp.  She probably won’t be motivated by hunger to go in the trap.

I slog my way around a thicket until I’m on the far side of where Kari had been sitting on a scrap of cardboard.  I start setting up the 48 inch humane trap in the gap between the thicket and the wall.  As I’m setting this trap near West Valley Highway, I’m thinking of two dogs I tried to trap recently in close proximity to deadly freeways.  Dianna, the black pit bull with gorgeous, startling, ice blue eyes, went in the trap after a few days, safe.  The dog that is on my mind most is the white Aussie with the black face that we tried to catch in Everett.  She was running in the median strip, which was 100 feet wide at that point, with a forest of trees and many ponds and creeks.  I remember seeing her face poking out under the guardrail as she was trying to decide when to dart across five lanes of traffic going 70 MPH in the dark.  There wasn’t much I could do, but I slowly crept my car up the shoulder of the road to try to encourage her to go back behind the guardrail.  I didn’t want to spook her, but just ease her back.  Eventually, she finally settled down in the grass, about 15 feet from the carpool lane.  She didn’t seem to acknowledge the chunks of Vienna sausage I tossed out for her.  When she retreated into the forest for a while, we took that opportunity to set the trap and a wildlife camera watching it.  We have a few pictures of her checking out the trap at 3 AM and going half way in.  Unfortunately, we got the notification the next morning that, at some point, she had run out onto the freeway and was hit and killed.  We had come so close to saving her, and then we lost her.  Although I feel pretty good about our chances of getting this little black dog into the trap, I keep thinking about the details, trying to make sure I am doing everything the best I can, to maximize our chances.  I don’t want to spook her out of the relatively safe swamp and onto West Valley Highway in the dark.  I get the trap set up the best I can on the uneven surface, and test it to make sure it is triggering correctly.  I catch the door in my hand to keep it from clanging down noisily during the tests, and then reset it.

Once the trap is ready, I slog around to my original position.  Kari feeds her little globs of cat food and coaxes her closer to the trap.  After she is partway out of her little den, I reach through the opening in the screen of reed canary grass and gently place my hand on her flank, to ease her ahead.  She is slightly startled, but she doesn’t panic.  Kari and I use our bodies to make a barrier and channel her toward the opening of the trap.  She is nervous, and for a moment she tries to just curl into a concave portion of the boulders that make up the retaining wall.  We ease her toward the trap opening, and she looks up like she might try to jump up to the top of the five foot wall.  Then she moves toward the trap and slowly goes in.  She does step on the trip plate, but by this time, Kari is already lowering the door gently.  This little girl is safe.  We can relax.  Now all we have to do is lift the trap, with her in it, to the top of the wall, up over the fence, and down to the sidewalk.

Kari lets Lily know that the dog is in the trap, and the Facebook group is updated that the swamp stray is safe.  Lily sends me a message that Diane has kindly agreed, for about the one-hundredth time, to hold onto our swamp dog overnight so she can go to the shelter in the morning.  As we load the trap into the back of the Prius, Tino sniffs at the trap, somewhat interested in the little dog that looks very much like him, but more interested in the smells of food that the stray puppy got, but he didn’t.  Once the girl is settled in, I get in and roll down Tino’s window so Kari can hand feed him a few globs of stinky cat food, which Tino thinks is the best thing in the world.  Kari follows us to Diane’s house, not very far away, and helps me carry the trap into Diane’s house.

I’m making a terrible mess in Diane’s very clean house because I’m soaking wet and my shoes are muddy.  Diane tells me not to worry about it.  We carry the trap to the bathroom where Diane has set out a plush blanket for our guest, and several towels.  When we open the trap, the puppy doesn’t want to come out for a moment, but then she moves into the bathroom and I move in behind her and close the door.  Kari has to leave, because people have things to do on Christmas Eve, and I thank her through the bathroom door.  I sit on the floor, my face near her face but not looking at her.  She is nervous.  She looks at the bathtub, like she might jump in to get some distance from me, but then she stays.  The dog and I are getting mud all over Diane’s nice clean bathroom.  She is making muddy streaks on the walls.  I grab a towel and wipe away as much of the mud as I can, and then, after I’ve cleaned all the mud I can see, she decides to shake, and she sends a shower of muddy droplets all over the walls and cabinets.  I clean it all up again.  Then I use a second towel to try to dry her a little.  She allows it but doesn’t seem real comfortable with me handling her that much.  Diane hands a microchip scanner into the bathroom.  I scan her thoroughly, down her back, from the tips of her ears to her tail, along the front of her neck and her chest, and I don’t find any chip.

She starts to relax a little, so I take a few pictures.  She reminds me of Tino’s mom, Salma, who I caught in the very same trap five years before.  I want to pet her all over and tell her how much I love her, even though we just met.  She doesn’t warm up to me too much, but she does seem to like it when I rub her chest gently.  Eventually she sits on my leg, and seems to accept the situation.  Sitting on the bathroom floor with her is not as soft as the grasses of the swamp, but it’s much warmer.  I would be happy to hang out with her in the bathroom all night, but it’s Christmas Eve and I haven’t finished wrapping presents.

Later, at home, after I’m out of my wet clothes and finally warm and dry, I see a message from Lily suggesting a temporary name for the stray.  Eve.  I think it’s perfect.