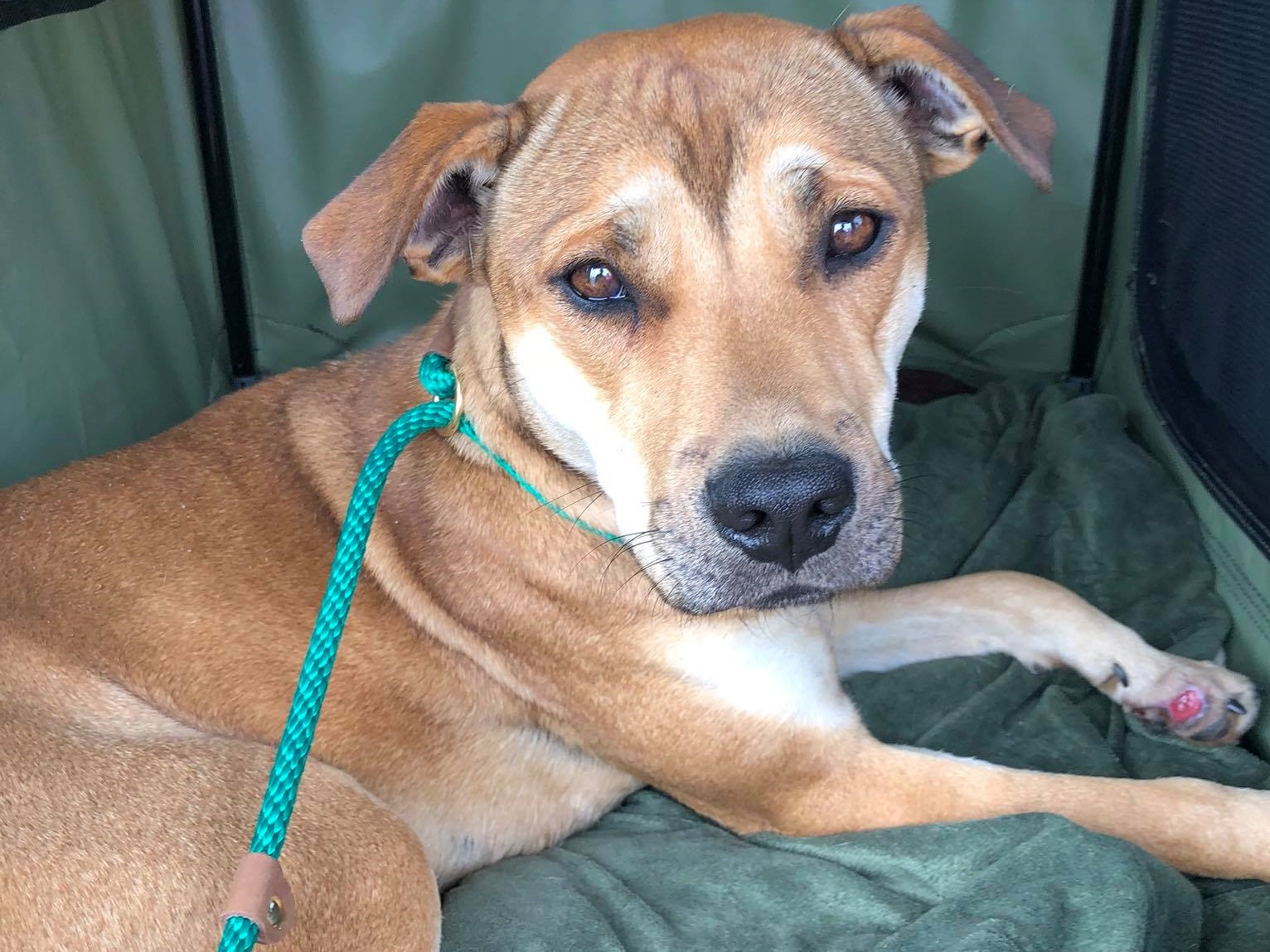 (Adopted) This is Sadie, our new beautiful stray dog captured in the Moses Lake area. There was an urgent and desperate message posted about this sweet girl. It was reported that she had been running for weeks and was believed to be either hit by a car or shot and that she was starving and hardly moving.
Sadie’s story:
Useless Bay Sanctuary called Animal Control (which is the sheriff’s department) and talked to the Officer who had overseen her case. He said he was unable to catch her and there were initially two dogs. He set traps and found the other dog shot and deceased outside one of the traps. The officer was surprised that the person had not killed both dogs because the other one was very close. So, we knew we had to get there asap to save this girl. UBS got permission to come out and trap her, however, the officer said there was no way we would be able to do it, but we were welcome to try and if we did get her, to take her with us. Two volunteers from UBS were not able to go until Sunday, so we took our chances and contacted Bob with Res Q Angles http://www.resqangels.com out of Yakima to see if he was available and he was. He is a talented and very creative trapper. He drove out there Friday night, talked to all the neighbors so he knew where the best place was to set the trap. He was talking to one of us when he was sitting and waiting and sure enough she came out and walked into the trap within one hour of setting it, AMAZING! Thank you, Bob, we really appreciate you coming out to help this girl like all the other strays you have helped. You surely saved her life!
Two of our volunteers drove over to Ellensburg on Sunday to meet Bob and Sadie to take her back to our area and get her healthy.
Sadie has an injured foot. She sometimes puts weight on it and most of the time she jumps on her back feet or holds up her leg because it seems to be painful, or she is a born ballerina and loves to dance on her two back feet. We will be getting her foot checked, vaccines and a health check tomorrow.
Please share this post to try and find her family.
Update:
She went for a check up and X-rays yesterday. The vet confirmed she was shot in her front left paw and it shattered her paw second digit toe. They said there is shrapnel throughout her toe. They said they were small pieces and should not give her much trouble, but the digit was in bad shape. The options are to splint the toe, which would take 6-8 weeks to heal. Her foot would be functional, eventually, but would probably have issues down the road and arthritis could set in too. What they don’t know is whether she will tolerate the splint for that long. The other option is that we could amputate that digit up to the 3rd joint of the paw. They said this is not the weight-bearing foot, so she should walk just fine with out that digit. They said her recovery time would be about 2 weeks and then she would run like the wind. They said amputating would probably be the best way to go. They want to talk with a specialist to ensure we are making the best decision for Sadie.
For now, she is continuing with an antibiotic, an anti-inflammatory for the pain and Epson salt foot baths.
Update – April 12, 2018:
Sadie had surgery today on her foot. They amputated the digit and she went through the surgery like a champ. She put on her charms so everyone at the vet’s office fell madly in love with her. She is back resting and it will take a couple of weeks to heal.
If you would like to help with her vet bills please donate at the button below.
Thank you so much for your support!