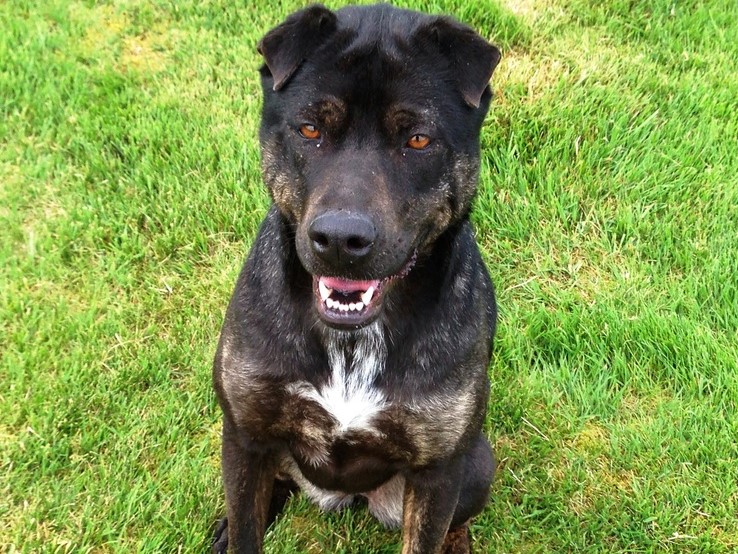 (Adopted) Sky had been living at the Cypress Lawn Cemetery in Everett for about 4 months. Residents of the adjacent community had been feeding her. After at least 22 hours of befriending Sky over a five day period, we got her into a car and to a temporary foster home. Sky has been adopted.

Useless Bay Sanctuary received a call about this dog running around Cypress Lawn Cemetery in Everett.  Residents of a nearby community saw her every day and wanted her to be safe.  She had been roaming the cemetery at least two months, and possibly as long as four months.  Several people were feeding her, but she wouldn’t let anyone touch her.  I saw her for the first time on May 10th, 2014, and lured her within 3 feet using teriyaki chicken.   I named her Sky because of the beautiful sky above us as we got to know each other.

On May 13th, I spent seven hours with Sky.  She barked at me at first, but soon remembered I was the one with teriyaki chicken.  I brought her hotdogs and cheeseburgers.  I would run away from her, and she had fun chasing me all over the cemetery.  I would run and then fall down, and she would run up to me, playfully.  After five hours of gaining her trust, she finally let me pet her.  Then she wanted to be petted all over.  She fell asleep against my legs for about twenty minutes.  I put a leash on her and was able to walk her around.  When we approached my open car, she would turn to stone.  I tried to ease her over that way, but I could see I was undoing the relationship I had built with her.  It killed me to do it, but I took the leash off and let her go back into the woods, knowing I would go back again, and build up to getting into the car at some point.

I visited Sky again on the 14th.  She was happy to see me and forgave me for putting the leash on her previously.  It finally occurred to me to bring the scanner to her.  She didn’t mind at all when I scanned her for a chip, and a number popped up right away.  We called the microchip company, and the chip was registered to a shelter in Hawaii.  We left Sky in the cemetery one more night.

On the 15th, we contacted Sky’s former owner.  He had been overseas, and left Sky with someone he trusted.  That person gave Sky away to another owner (without his consent).  He had had her since she was a puppy and named her Zoe.  He agreed to come to the cemetery.  I warned him Zoe might not respond as if she recognized him.  When he arrived at the cemetery, he called to Zoe and she stayed away from him.  I was able to coach him on Calming Signals, and after a couple of hours, Zoe let him pet her.  It took still more patient coaxing to get her in a car, but she didn’t fight it.  Zoe then went to a foster home.  Her owner can’t keep her because he lives in an apartment where dogs aren’t allowed.  Zoe/Sky checked out just fine at the vet, and has been adopted.    Sky now wears a GPS collar, just in case.

Sky stayed in a couple of foster homes where things did not work out.  I (Jim Branson, the founder of Useless Bay Sanctuary) ended up with her, and I am adopting her.  I loved her from the moment I first saw her, and now she is part of my family, along with my four other dogs.  Sky still has issues, stemming from her time in the cemetery, but she is in a permanent home now where she is loved.  She plays with my other dogs every day.