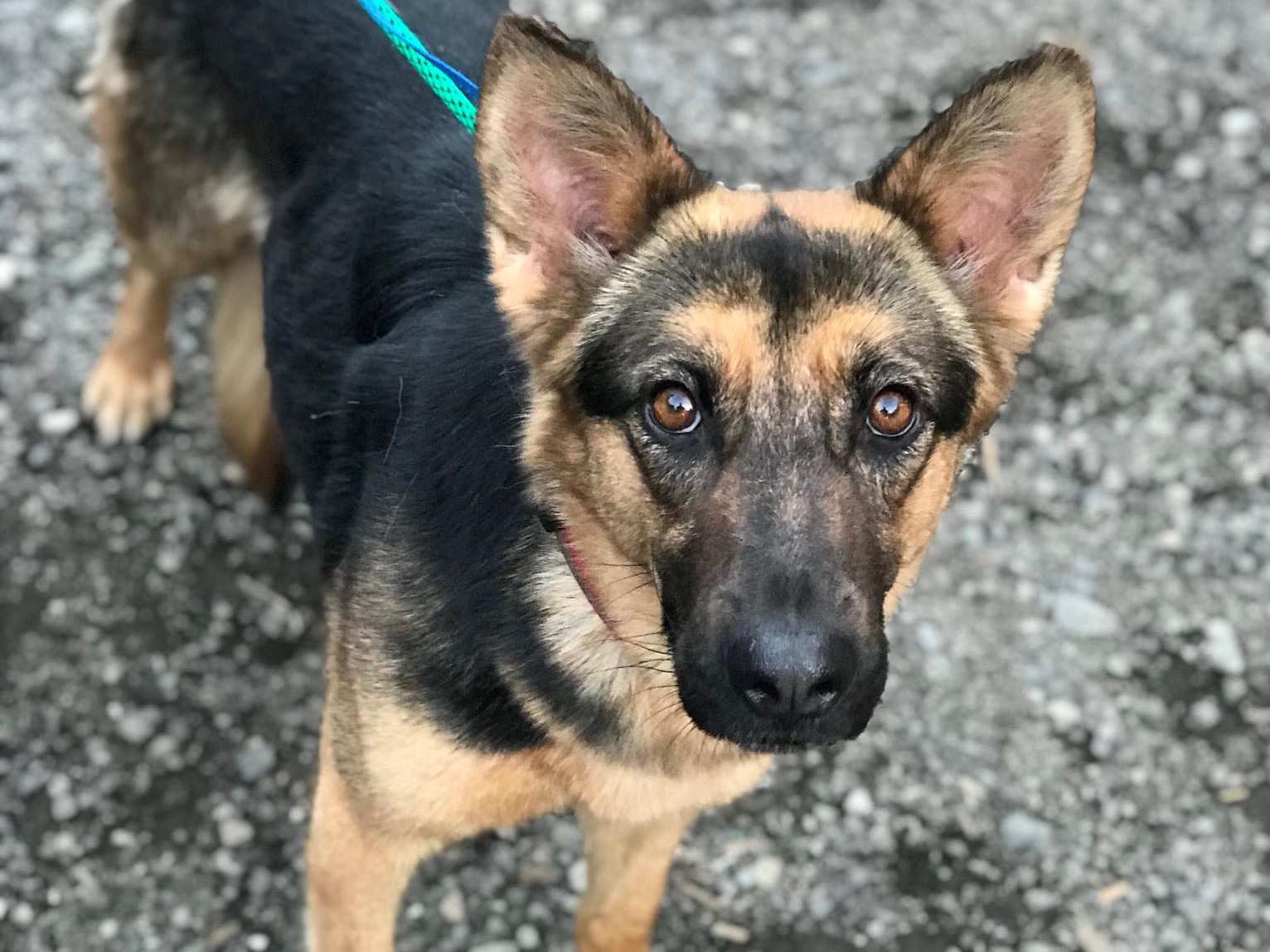 (Adopted) Yesterday, UBS volunteers used a big net to catch a little German Shepherd in Mill Creek. We don’t use the big net very often, but every once in a while it comes in handy. This sweet dog, I’m calling her Hanna, had been reported wandering near Martha Lake. A volunteer went to investigate, and saw her go into a backyard. We asked permission to set a trap there, and set the humane trap in what I thought was the only exit from that yard. Hanna squeezed through the hedge into the next yard and continued wandering. Three UBS volunteers watched Hanna’s movements over the next hour or so, and tried to keep her safe from traffic.
I saw Hanna go into a large yard that was missing a section of fence. The volunteers converged on that address, and spotters on the corners of the property observed that the fence was complete, other than the one gap. It seemed we had her contained. I have a large net, about 12’ by 15’, in my car at all times. We have caught at least five dogs with it in the past five years. Normally, a big net is not that useful, except in situations like this. I put the net across the gap in the fence, and put the humane trap under it so the opening of the trap was in the yard. If Hanna tried to get out of the yard, she might see the trap as an opening and go in it.
We talked to a neighbor and learned that Hanna could get out another gap in the fence if she found it. We got permission to go into the yard, and volunteers and neighbors gently herded her toward the gap in the fence. She actually went into the trap once, just like the plan, but the door didn’t fall. In my haste, I didn’t adjust the setting of the trigger mechanism right and didn’t take the time to test it. Once Hanna learned that the trap wasn’t an exit, she started probing the net with her nose, to try to figure out how to get under it. Volunteers calmly stepped on the outside edge of the net to keep her in. About seven people slowly converged on Hanna, to push her into the trap again. She didn’t panic, but she eventually went into the trap again just to hide from these advancing strangers that were making her nervous. Once she was in the trap again, a volunteer manually closed the door. Hanna was safe.
After Hanna was safe in the trap, I thought, I sure wish I would have shot a video of that. Having experience with all kinds of situations, and having volunteers on hand and a variety of tools, allows UBS to help dogs that might be difficult for untrained people to catch. The big net probably won’t be needed again any time soon, but it’s always in my car, just in case.
Hanna is now safe in a foster home, and we are trying to find her people. Posters are going up in the area she was found. Some one thought they might have seen her before in the area. The owners have not yet responded to our numerous posts, but maybe they are away on a trip and don’t yet know she is missing. Hanna doesn’t have a microchip or a tag. Please help us find Hanna’s people.
Also, if you see a wandering dog like Hanna, keep in mind that UBS is here to help, with years of experience and a variety of tools.