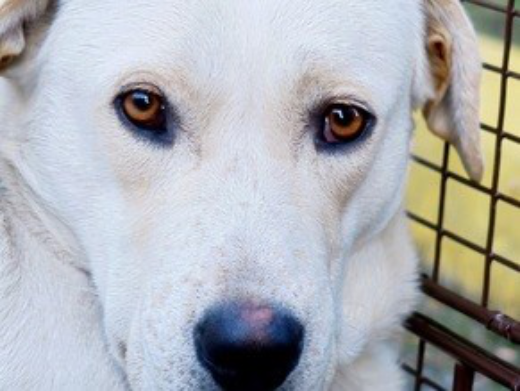 (Adopted) Jackson first came to the attention of UBS when he was seen in Heritage Park in Kirkland.  He ran over 20 miles and ended up in Redmond, where UBS volunteers caught him in a humane trap.  We searched for his owners, but they never came forward.

Useless Bay Sanctuary first learned of Jackson when he was seen at Heritage Park in Kirkland on September 15th, 2015.  Over the next week, dozens of people saw him as he ran all over Kirkland and eventually as far as Bothell, Woodinville, and Redmond.  After the initial reported sightings, UBS volunteers put up signs in the area, asking people to call if they saw him in the area.  The typical report was, “I saw him ten minutes ago, running down the street and into the woods.”  He had learned to use the network of trails between dead end streets in Kirkland.  I got there in time to see him myself, on the third day of his adventures.  I brought the magnet dog, Fozzie, to see if Jackson would approach him, but he was already loping down the street before we got close.  For most of the sightings, we arrived too late to prevent other people from chasing him.  Even though our signs said, Do Not Chase, people typically chased him first, and then called us.  It’s an instinctive reaction when people see a stray dog and want to help.  They assume a dog will understand their good intentions, because dogs are often quite adept at reading our intentions.  However, once a dog has a tense encounter with a Good Samaritan who tries to grab his collar, he tends to run from everyone at the first moment they move toward him.  We learned that the person he hung around with for several days was someone who just ignored him while she was outside taking a cigarette break.  It’s advice that we give over and over: if you see a stray dog on the run, please don’t chase him.  Use Calming Signals, or just ignore him, and let him come to you.  Our mission at UBS is to help stray dogs, and we will have much greater success when this meme penetrates the awareness of the general public:  Never chase a dog!

For five days, Jackson stayed in the northwest quadrant of Kirkland, running between Heritage Park and Forbes Creek.  We received regular sightings of him at both ends of his range, and occasionally at points in between.  Most of the reported sightings were definitely him because people reported seeing the black harness with the leash draped along his side.   Jackson liked to rest in people’s gardens or in the woods, and he would position himself strategically, with a good line of sight to see who is coming and at least two avenues of escape.  His movements were being tracked on several community Facebook pages.  On one Sunday afternoon, I saw three cars slowly trolling the neighborhood where he was last seen, trying to get a fix on his location.  Jackson learned how to run down a dead end street and take a walking trail to the next street.  He could outrun anyone on foot, and he had a foolproof means of evading anyone in a car.  He found plenty of water sources, such as Forbes Creek and many decorative fountains in that neighborhood of Kirkland.  We set three traps for Jackson, along his known paths of travel.  Volunteers checked them regularly.  On all the Facebook pages following him, we asked people not to chase him, so he could settle in one place long enough to smell the bait and enter one of the traps.  We know the traps work because we caught a dog named Lighting.  He had escaped from his yard, and his owners were out searching for him.  A volunteer read his tags and called the owners, and Lightning was reunited with his family quickly.

On the 21st of September, the 6th day of his adventures, Jackson was seen 5 miles north of his established territory.  We can only assume that someone chased him and tried to catch him.  At this point, we still don’t know anything about his owners, but it is possible that he was trying to get back home somehow.  UBS volunteers posted large, colorful signs at major intersections in Woodinville, to generate new sightings.  We got several calls.  The next call was at three in the morning, in Woodinville, three miles south of his previous sighting.  That caller contacted us because of a craigslist ad we had posted, asking people to contact UBS if they saw him.  Jackson was running around a winery.  We learned that they feed feral cats there, and we figured he would stay put for a while, having water, a food source, and plenty of places to stay away from people.  This time, UBS volunteers got signs up ahead of Jackson, in the neighborhood to the south, in case he continued the arcing trajectory of the previous sightings.  UBS volunteers logged hundreds of hours tracking Jackson, putting up signs, tending traps, and working social media to coordinate his recovery effort.

On September 23rd, the eighth day of his adventures, Jackson showed up in Redmond, about five miles from Heritage Park but at least twenty miles away along the route he took.  This sighting was just a block away from one of our signs, so all that extra effort paid off.  I was able to get there in the afternoon, about 90 minutes after the second sighting in the same location.  I pulled into the parking lot of a condominium complex, and slowly scanned the landscape.  I drove to the adjacent complex, and saw Jackson slowly walking down the hill.  He crossed under a guardrail, back into the other complex.  Using a camera with a telephoto lens, I was able to get a decent picture of him for the first time, and learned that he was a boy, something we hadn’t known up to that point.  I watched him meander along a garden path, up the driveway, and settle on a grassy knoll.  His resting spot allowed him to see west, down the driveway, to the busy street 300 feet away.  He could also see south and north into the neighboring complexes.  He watched me as I scouted the area for a good place to set the trap.  I kept my back to him and pretended not to see him there at the top of the hill.  I called on volunteers to bring me cheeseburgers because I had neglected to bring any decent treats and I didn’t want to take my eyes off of him.  Several residents of the complex came by, and they were confused when I asked them to stay away from Jackson’s resting spot.  They eventually understood and cooperated.  One neighbor gave me a can of cat food, so I could set the trap without waiting for cheeseburger delivery.  I usually always have cat food cans in my car, but my car had just come back from the shop, and my usual gear hadn’t been loaded yet.  Jackson watched me with sleepy eyes as I set the trap about forty feet from him, keeping my back to him the whole time.

I walked about fifty feet down hill and watched Jackson while keeping my back to him.  I used my camera, with it’s rotating LCD screen, to look over my shoulder.  Within a minute after I walked away from the trap, Jackson got up to investigate the aroma of cat food.  He wandered around the trap, the way stray dogs usually do.  He walked about halfway to me, to check me out and see if I posed any threat.  I kept my back to him and watched him over my shoulder.  He returned to the trap and walked in within three minutes of the time I set it up.  I watched as he went all the way in the trap and ate the whole can of cat food without triggering the release mechanism.  It must have been a little sticky.  I didn’t panic, though.  I knew that even if he didn’t trigger the trap that time, he learned that a trap was a safe place to get food, so we could reset it and try again.  Fortunately, as he turned to get out of the trap, he triggered the release mechanism, and he was caught!  He was startled for a second or two, but then he just relaxed.  When I slowly approached the trap, still using Calming Signals, he didn’t seem too stressed, even though he wasn’t happy about it.  Mostly, he seemed tired, and ready to give up the chase.  I sat with him as we waited for his cheeseburgers to arrive.  He let me touch him through the wire mesh, and he seemed resigned to his fate.  We loaded the trap into the back of an SUV, and opened it slightly to reach in and scan him for a microchip.  I didn’t have my chip scanner with me, because of cleaning out my car for service, but another volunteer had the scanner she always keeps in her car.  Jackson didn’t have a chip.  He relaxed and allowed us to pet him.

Jackson stayed overnight with one volunteer foster, and then I picked him up to take him to the shelter.  We went to a local park and walked around in the sunshine for about an hour.  I used two leashes, one on a collar and one on his harness, to ensure he didn’t get loose again.  Jackson seemed to like me just fine, even though he seemed uncertain about everything that was happening to him.  Where was his family?  Jackson is a friendly, healthy young dog.  He is stunningly beautiful, as are all dogs, so it seems someone ought to be missing him.  I drove Jackson to the shelter and they checked him in.  He wanted to go with me when I left.  I came and visited him a couple days later.  If his owners don’t claim him–if they don’t go to the shelter and find him, if they don’t respond to our ad on craigslist, if they don’t see the dozens of posts on social media, if they don’t see any of about a hundred colorful posters about him–then I will pick him up and drive him to a foster home.  If we can’t find his owners after thirty days of trying to contact them, then Jackson will be available for adoption.  Of course, I wish I could keep him, but I already have plenty of dogs, and I can’t keep them all.